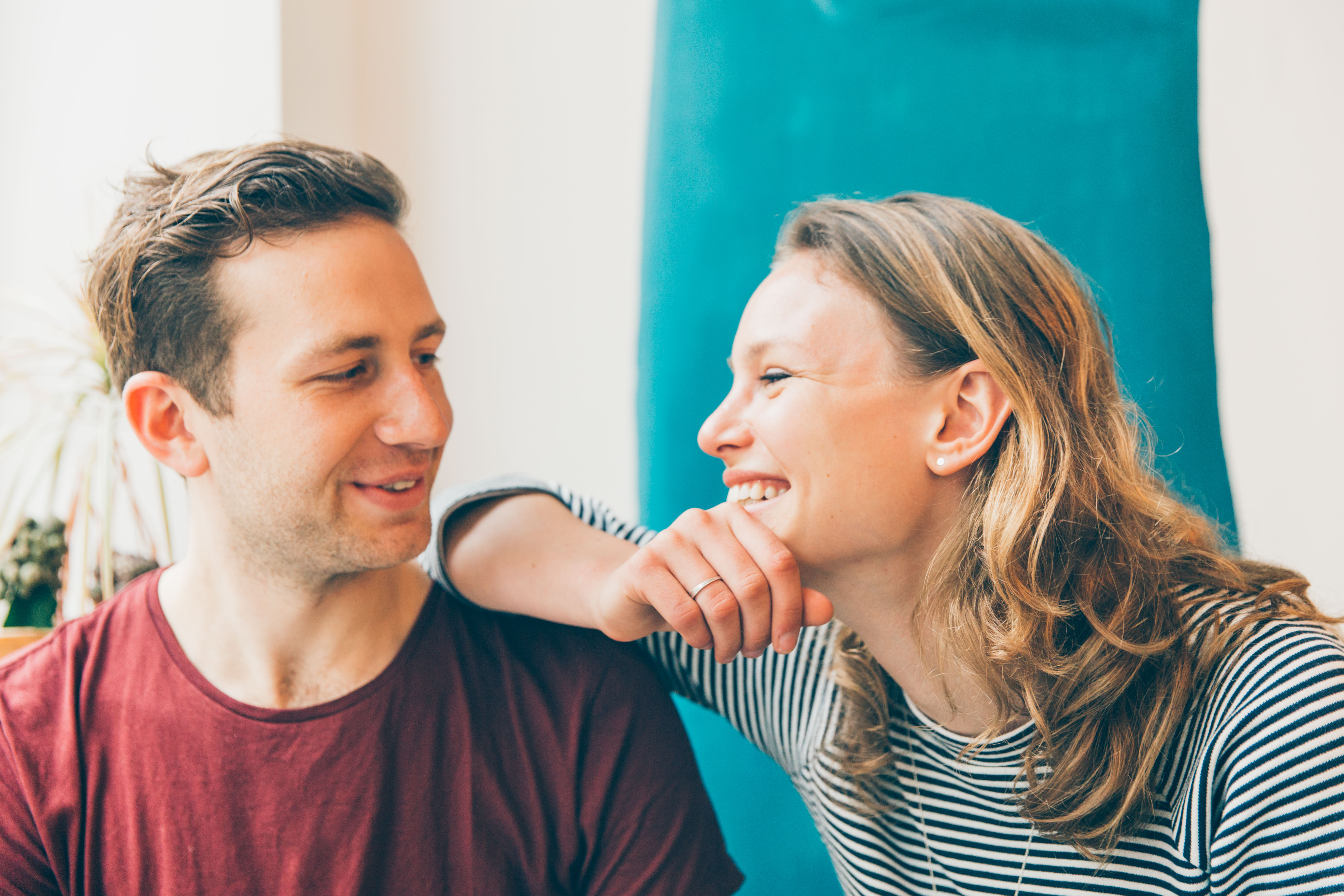 She’s intelligent, funny but also very clumsy. He’s down to earth, sweet and into sports. After a long-distance relationship, Jack from Mexico and Natalja from Holland now live together in Amsterdam.

We met a long time ago, in the era before smartphones. Almost nine years ago. I first saw Jack in a kibbutz in Israel. I was a young student and didn’t want to go to college at 17, so I decided to take some time off and travel. I’m Jewish and wanted to learn more about my background and heritage. Hence the kibbutz. I worked and partied there with almost 80 other people my own age and I also took lessons in Hebrew. But, to tell the truth, it was mostly partying.

I had just finished high school and decided to have a gap year; my friends and I would first spend 6 months in Israel and then go backpacking through Europe. One of our first nights in the kibbutz, we decided to chill on the beach: playing music, drinking, chatting. I sat on one side of the fire, Nats on the other. Next to her was a Mexican guy I knew, so I asked him in Spanish: ‘hey, tell your neighbour to come over and sit next to me.’ I really thought she would say no; she was, and is, very beautiful and I knew for sure she would be conceited. But no, she actually wandered over and sat next to me. I thought: ‘oh god, what should I do now?’

Back then, there were payphones in the kibbutz. Once a week we called home, usually on Fridays. One of these Fridays I walked to the payphone to call my parents and Jack was there, talking to his mother. I got so nervous walking over to him, I actually didn’t see the parked bicycles and fell over! He came running over to me and helped me to get up. That’s when it all started. Jack and I spent more and more time together. We stayed up all night talking and when the sun came up, we had to work or go to school. It didn’t bother us – we could sleep after class. Time was of secondary importance. We lived completely in our own world. Whatever would happen in the future, we had our own cocoon, and no-one could take that away from us.

You know what he would do, those first days, when we accidentally met in the kibbutz? He would point with his fingers to his eyes, and then to mine. And then he would say: One day you’re going to be my girlfriend. I always reacted very negatively, because I thought he was being arrogant. He was convinced we would end up together. I mean, how could he know that?

But I was right, wasn’t I? Arrogant, but right.

Being in love in Israel was fantastic. I remember exactly how I felt. I can still feel that same way with Jack sometimes. Like time and place do not exist.

It was very special, because everything was different there, hard to comprehend. If we’d met in Mexico or Holland, things would have been or felt different. You’re in a strange world that you explore together, growing up slowly. We had four months in the kibbutz together. After that, Natalja would fly home to the Netherlands, but she changed her flight so she had an extra two months in Israel. We decided to live in Tel Aviv for a while, with some friends from the kibbutz. I lived with some Mexican friends in one apartment, Natalja with three girlfriends in the apartment next door. Suddenly I realized: what comes next?

After spending six months, we got to that moment: now what? We didn’t know what would happen, so we told each other: let’s try to stay in the moment and not think too much. We didn’t have any other option. We decided to have a good time while it lasted.

Nats flew back to Holland after seven months. I travelled on with friends, like the plan had been all along. Four months. But when my friends decided to travel to Denmark, I took the train to the Netherlands in order to see Natalja. One time, I even travelled by train from Florence to Leiden. Madness (but that’s in hindsight)! It took me twelve hours just to get there, and once there I could only spend twelve hours with Nats before having to go back.

That was such a huge surprise! He’d spoken to my mother. I opened the door and there he was. Can you imagine? He had no money at all, but he’d travelled all that way, twelve hours, just to see me.

After my time in Europe, I had to go back to Mexico. That was such a strange time. We tried to travel back and forth as much as possible, to see each other. Every 3 or 4 months she came to Mexico or I went to Holland. Every few months your life is freeze-framed, outside of time or place. She was here in the wintertime, and I was there during summer. In between, I worked to save money. And we skyped. In the spring I went back to Holland and started looking at some universities.

He decided to study in the Netherlands. He wanted to start an Economics course at Erasmus University and I studied Anthropology in Amsterdam. We lived in different cities, but saw each other every weekend. That way, Jack could build his own life here.

It was very difficult at first. I was only 20. I had to adapt to a new country and a new culture. And I had never lived on my own – I had to learn to do everything, from doing laundry to speaking Dutch. It was a struggle just to get a visa and stay here. But it was also fun, growing up in a country so different from your own. I’ve had more opportunities to make something of myself and explore the world than my friends in Mexico.

We’ve been living together in Amsterdam for three years now. I love living together. It’s so wonderful to wake up together every day, make plans for the future or just hang out with a cup of coffee, the two of us. We can just do all that now! These are the moments I love the most: walking through the city together. Chilling in a coffee bar far too long. Lying in the park all afternoon. Jack will be a Dutch citizen soon – he’ll finally have a Dutch passport and all the hassle will be over.

We really grew up together. We were only seventeen when we met, just figuring out who we were and what we wanted out of life. You go through so many crucial stages, apart and together. You just have to hope that you’ll end up with similar intentions and ideas. There’s no trick; it’s not always easy. Reflection is important; a lot of problems in relationships are about personal problems. And it’s imperative to give each other space. Especially when you’re so young, you have to give the other person room to figure it out as a person. Don’t hold each other back.

And don’t forget to enjoy it. Make memories together. All travels, free time spent together and cups of coffee will eventually be memories. At a certain point, when you wonder whether you’re with the right person, you have to be able to look back and say: we did all of these things together, we have all those memories and that makes it worth it.