The pangasius conundrum // Sustainable from the Far East or caught locally? 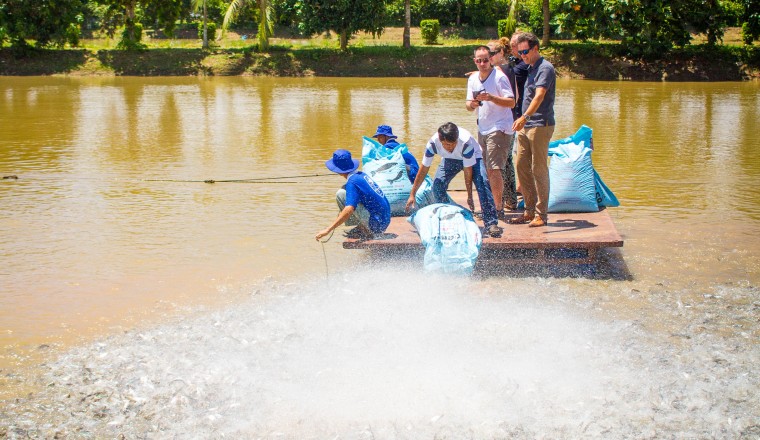 I’ve had some long-standing doubts on how to start this article. It’s written for Modern Hippies, people who’d perhaps prefer to not eat meat or fish at all. I do eat both meat and fish, although I’ve experimented with the vegetarian and vegan lifestyles – but for me, at this moment, it’s not the right choice. I watched an interesting documentary  on (not) eating meat the other day, though: Cowspiracy. This docu researches the impact of the meat industry on the environment and how environmental groups deal with this information. And especially: that the world would drastically improve if humans ate less meat (ever since watching it, I’ve tried to cut back on my meat consumption again). But anyway, today we’re talking about fish.

I’m of the opinion that, if it’s within your monetary means, the choice between eating organic meat/fish and meat from factory farming or tuna that’s caught with nets is an easy one. With that in mind, I wrote an article on my experiences in Vietnam: my journey to examine the breeding and production of the pangasius fish more thoroughly. 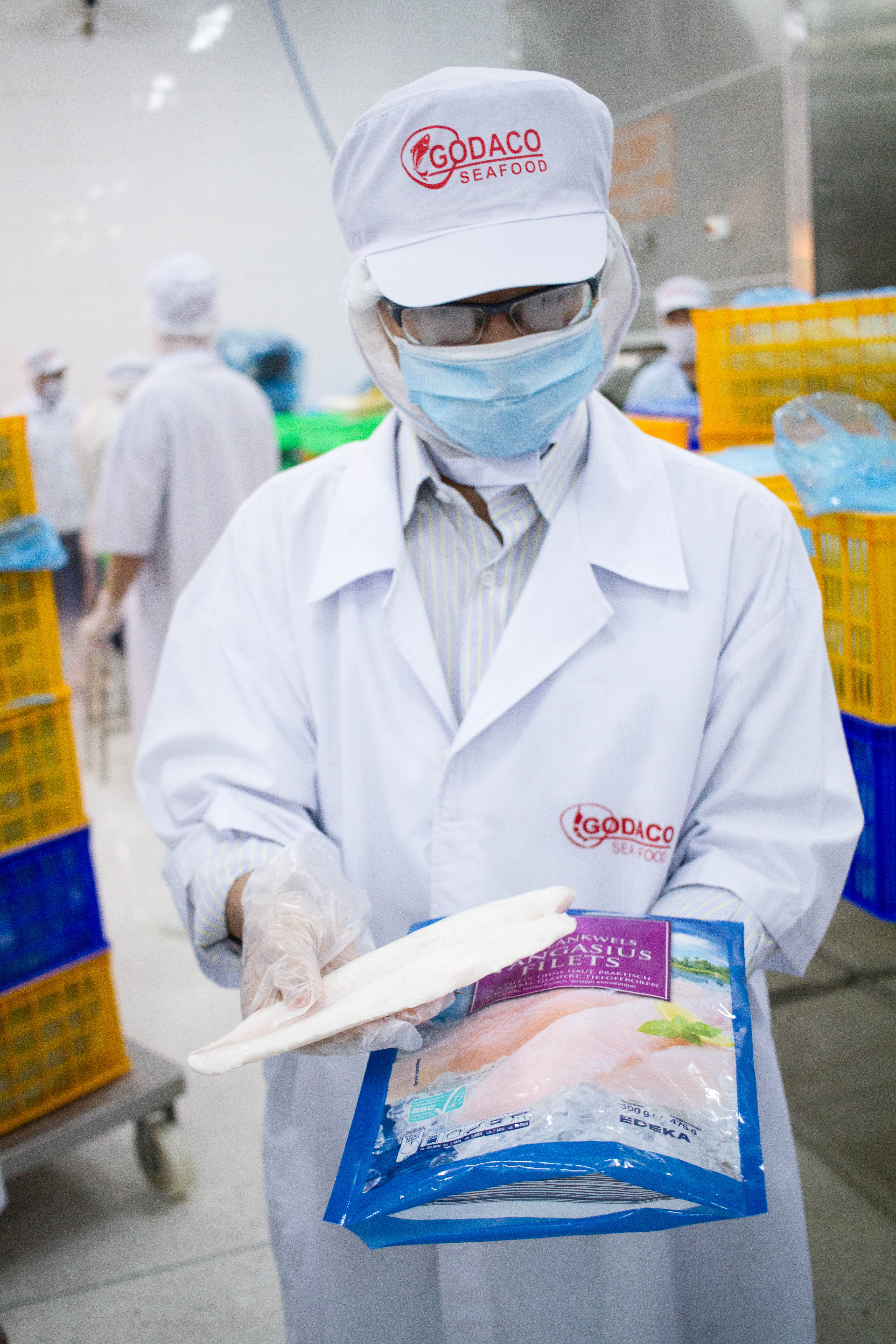 Pangasius. It’s more vilified than any other fish known to man, and yet it’s still consumed on a large scale – presumably because it’s cheap, healthy and easy to prepare. But is pangasius really that healthy? What’s the truth in all those horror stories we read about it on the internet? How does this fish get its bad rep? Is it all made up by journalists with a secret agenda or by fishermen in the West who feared the competition from Vietnam?

Before leaving on my 5-day press trip (unpaid, but of course it’s a huge honour to be invited on such an amazing experience) I did a lot of research and read a great many articles on the subject. My head was spinning: what a lot of negative information, but almost none of it based on scientific research. One thing’s for sure: there’s no fresh pangasius fish in Holland. Every pangasius that you buy in the supermarket, or even at your local market, is defrosted. This ‘scandal’ was uncovered by the tv show Keuringsdienst van Waarde. But apart from that, there are a lot of rumors about the use of hormones, pesticides and contaminated water in the bredding of the fish. I jotted the information down and made a mental note to research these topics during my press trip. 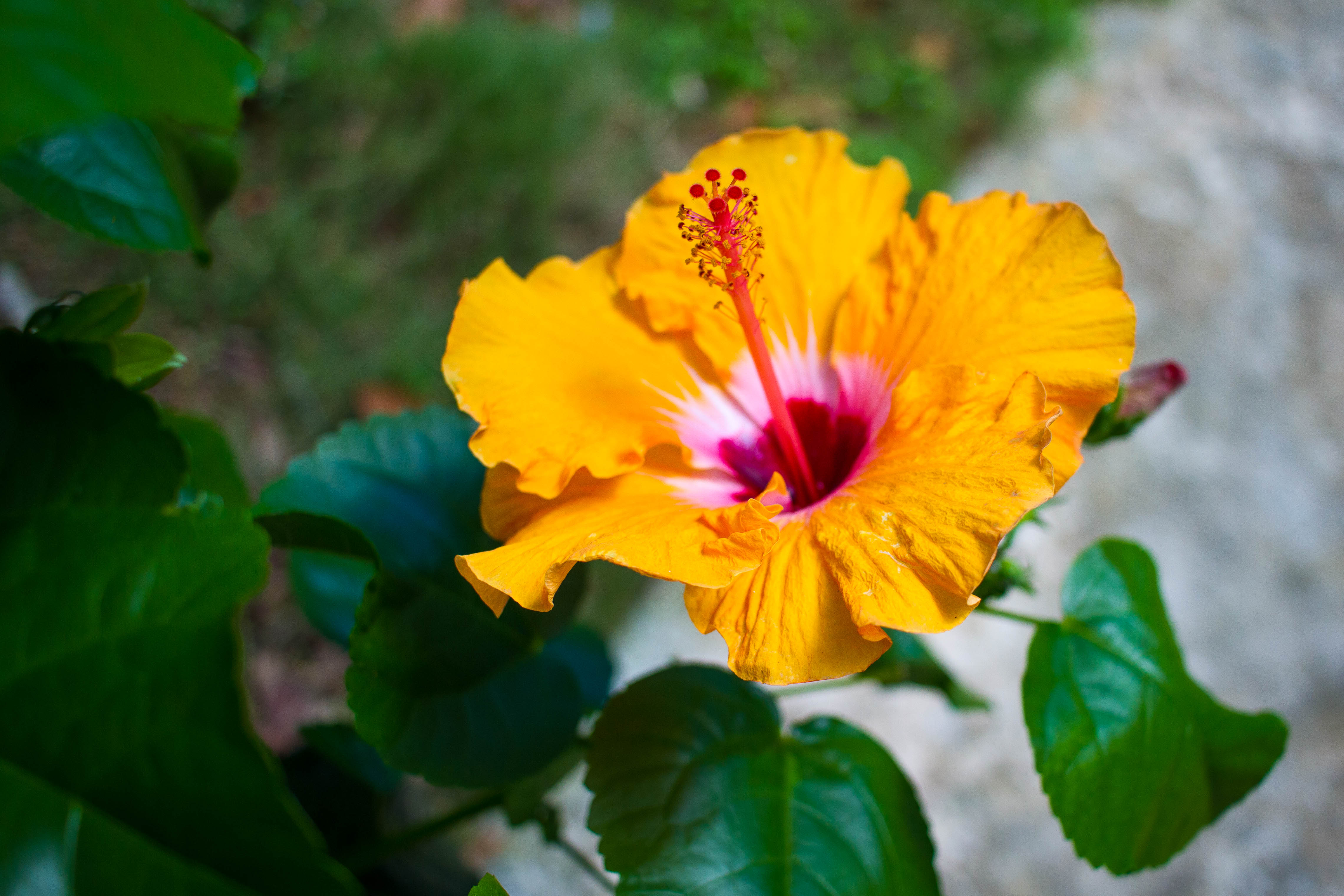 When Vietnam started breeding the pangasis fish years ago, the industry was basically just winging it: there was no format and no labels existed. The fish was bred in small, self-dug ponds and the water was hardly ever changed. Now, in 2015, everything’s different. The pangasius production industry is a business worth millions of dollars, with a huge export to the US and Europe. That’s why the ASC label is in place, from the 20th of August, 2012, on: the ‘Aquaculture Stewardship Council’. This label guarantees customers that they buy socially and environmentally consciously bred fish.

In 2015, about 50% of the production in Vietnam and 100% of the pangasius bought in Holland has the ASC Label. This label, fonded by the WWF and IDH (Sustainable Trade Initiative), makes sure that:

Being approved by the ASC label is a lengthy process, which can take months of time and energy. Every company that’s ASC approved gets regular check-ups.

Our group of bloggers was lucky enough to get a tour of the ASC-approved fish farm Godaco.

We reached Godaco by boat, across the Mekong river, and were welcomed with fresh coconuts and potatoes steamed in coconut milk. Our tour started at the ponds containing the youngest fish and ended at the one where the live fish would be transported to the factory (in tanks, again on a boat across the Mekong). 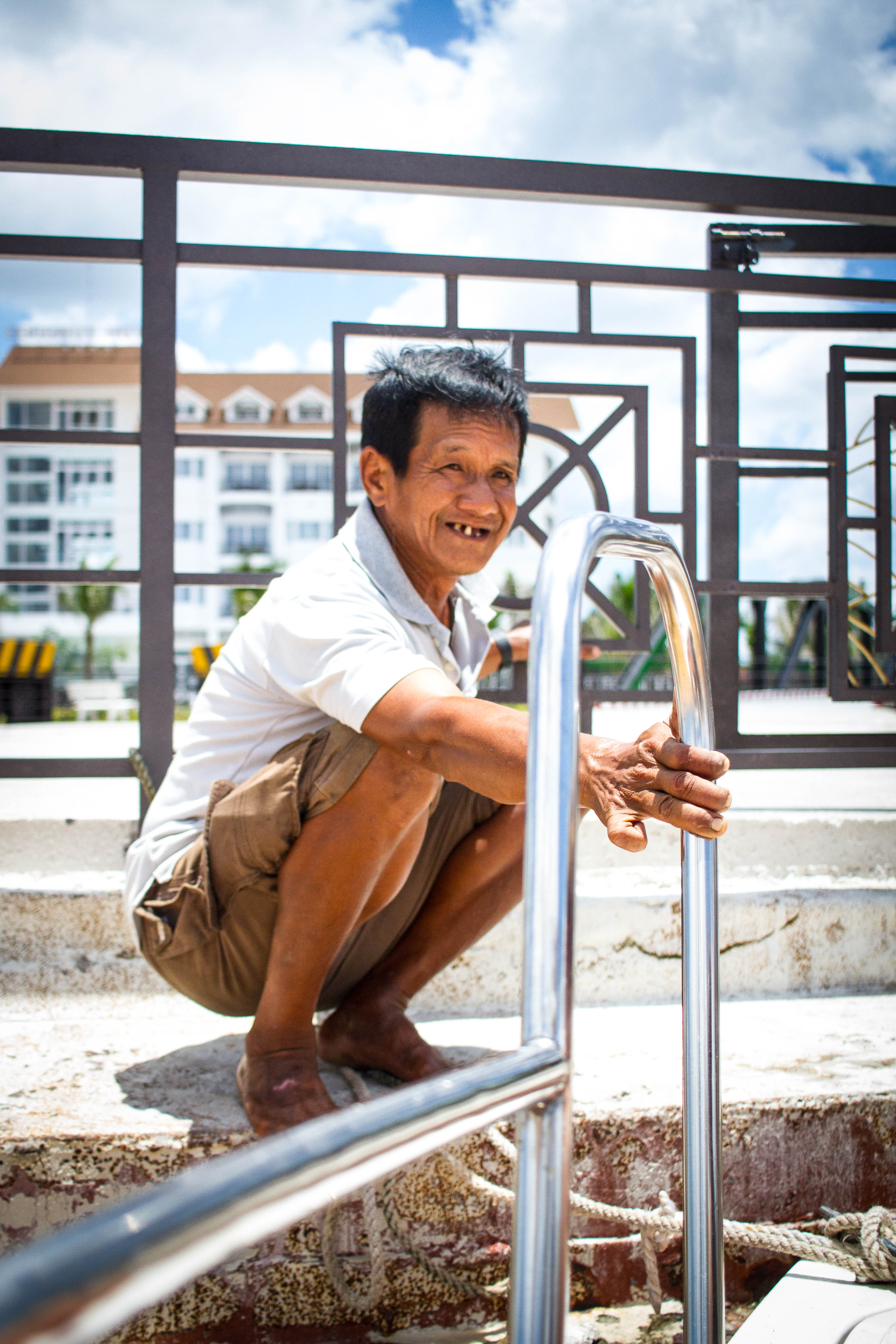 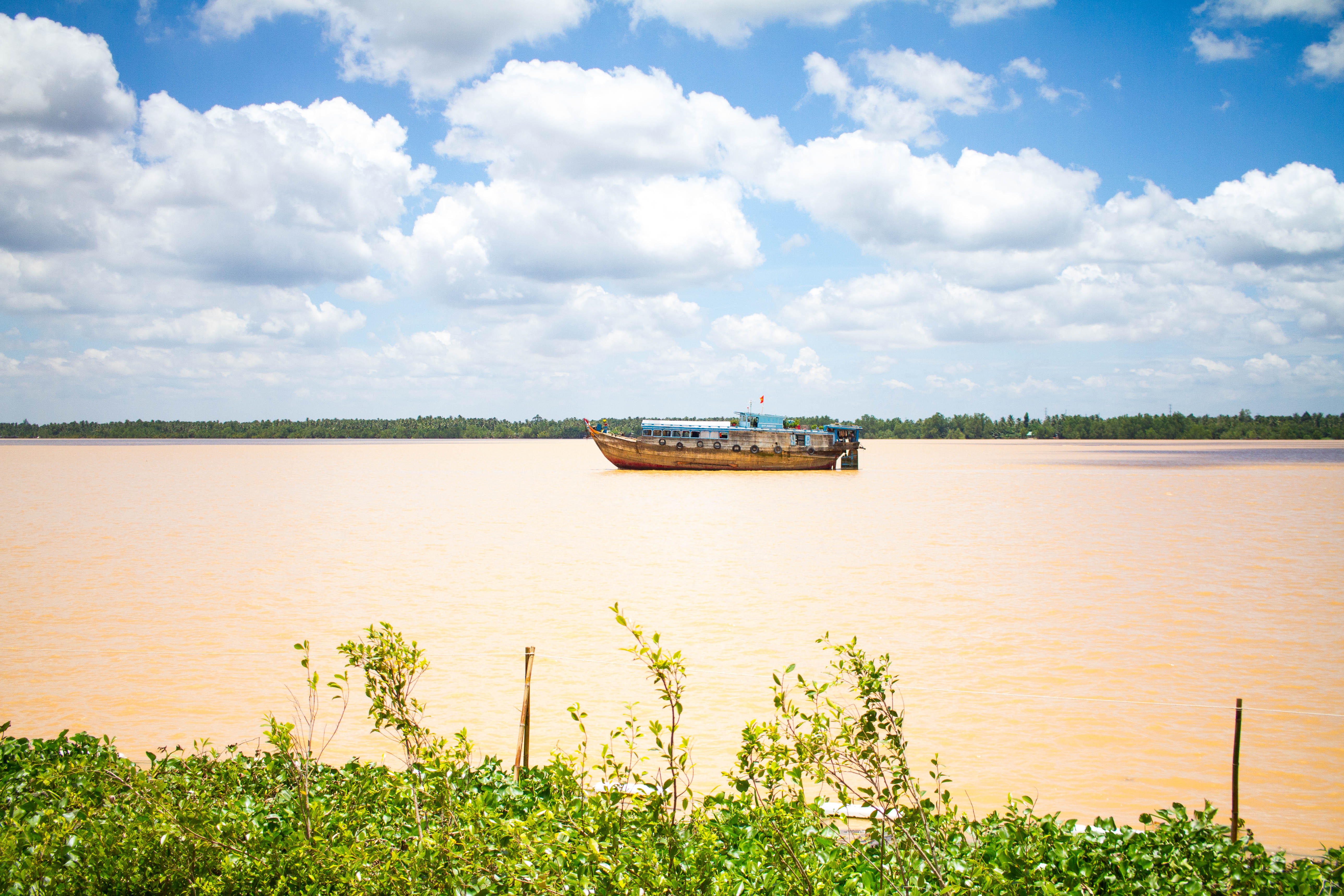 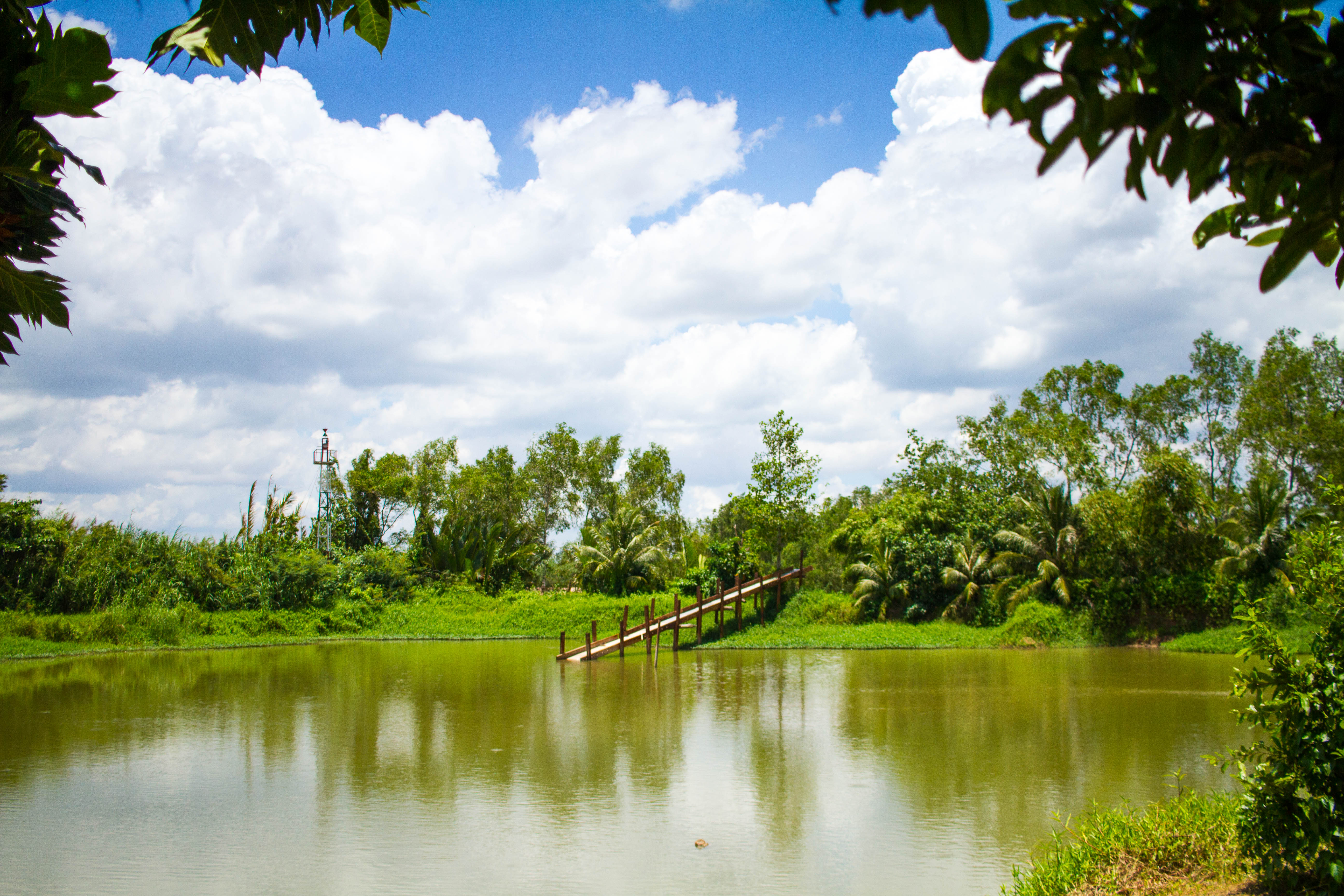 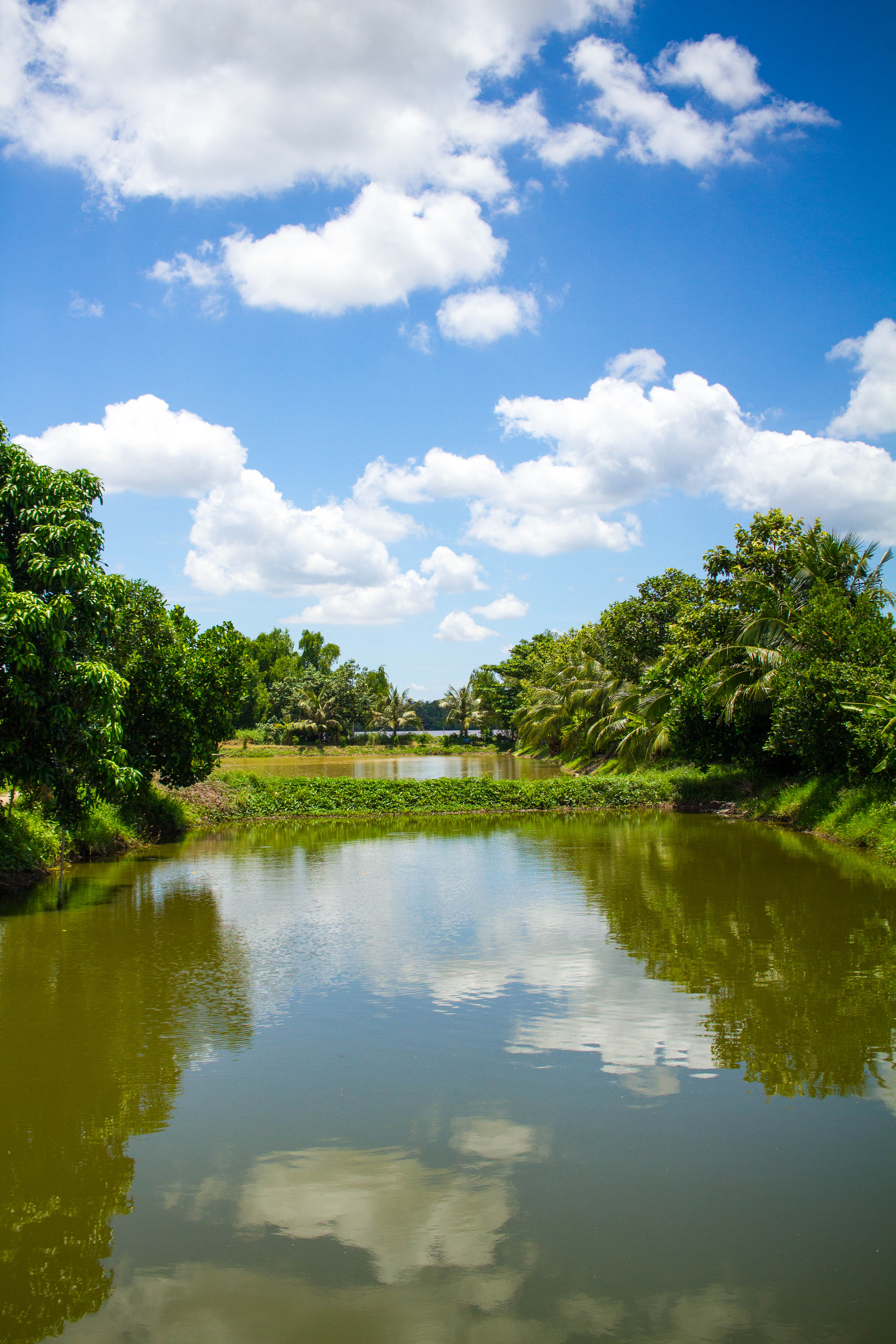 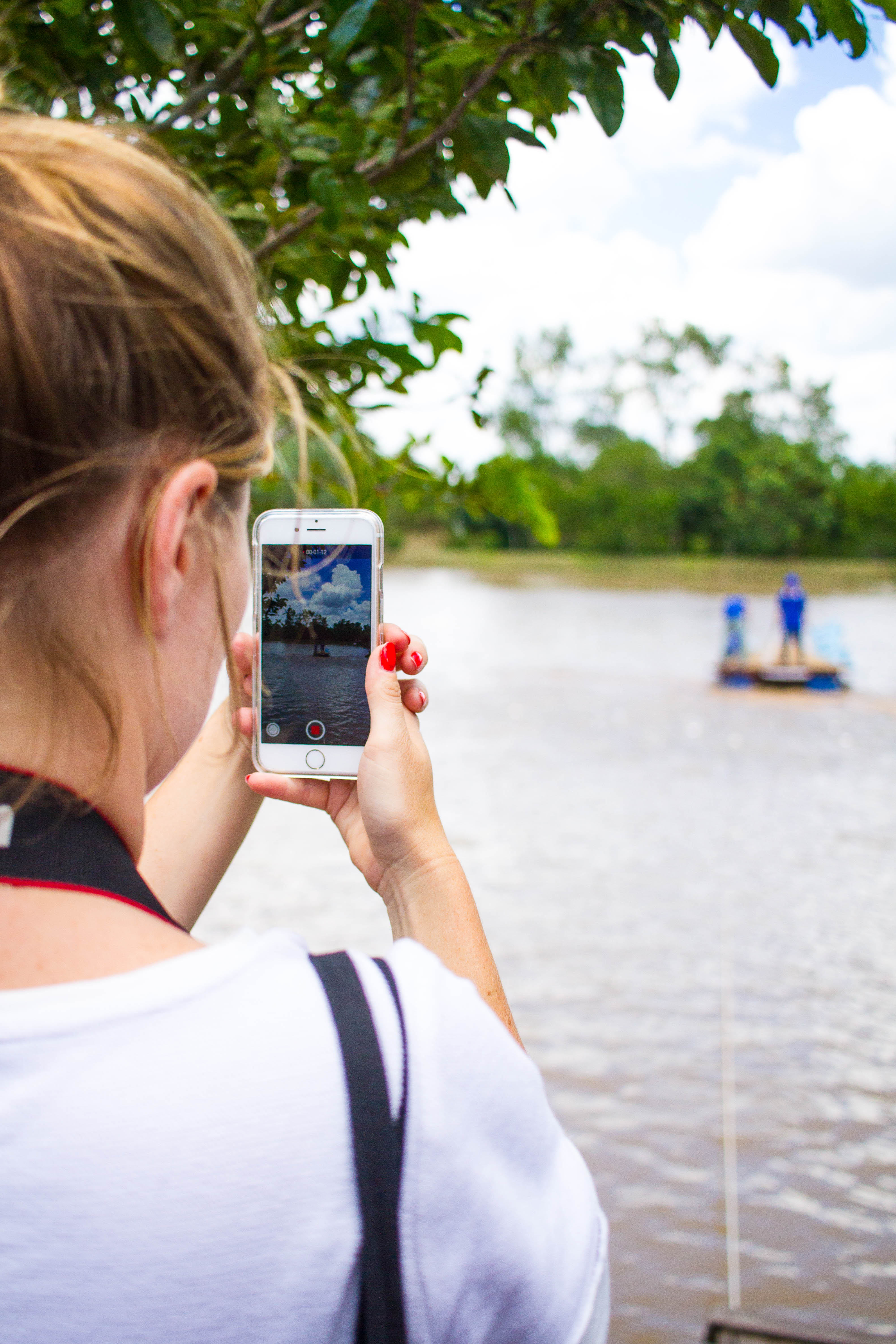 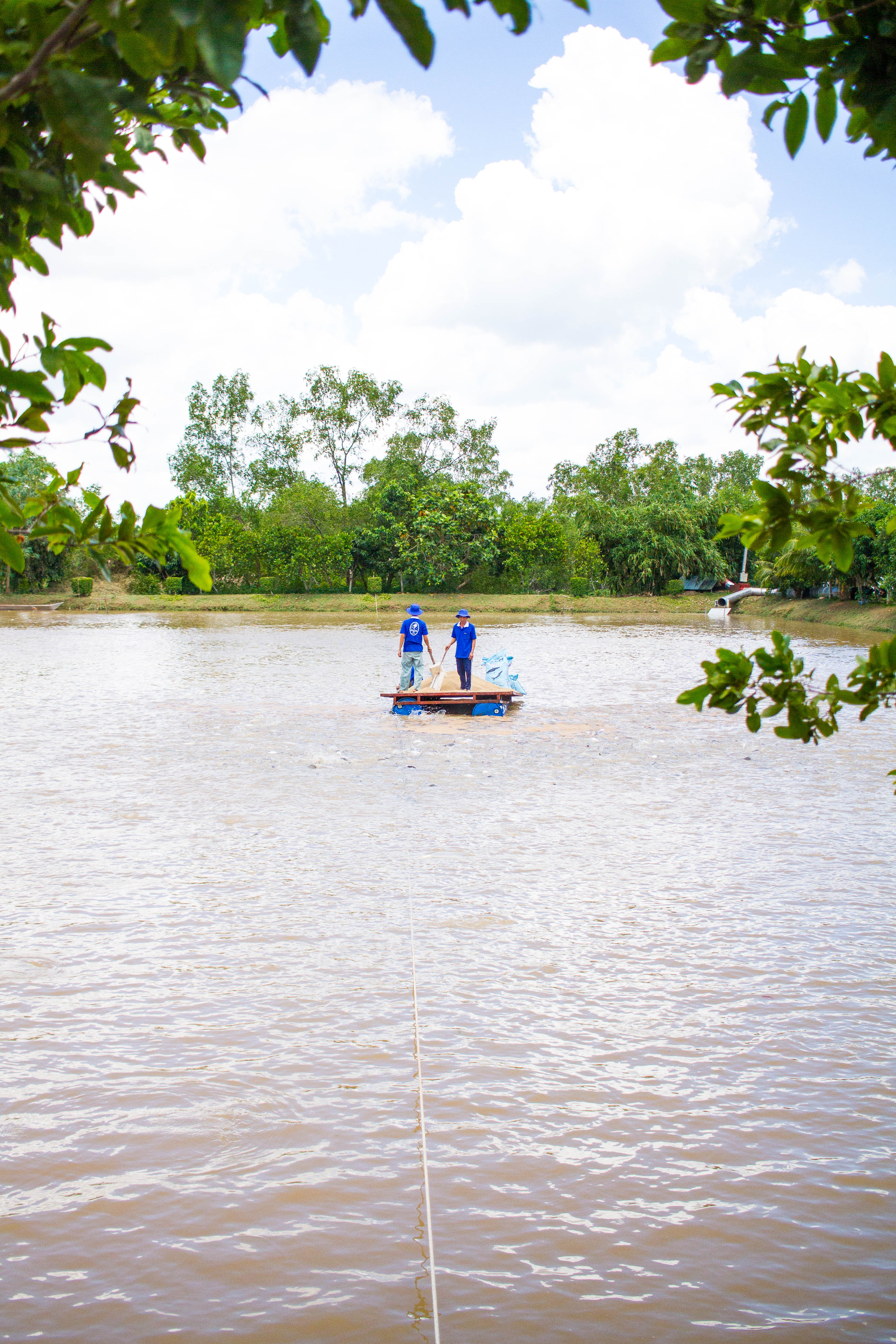 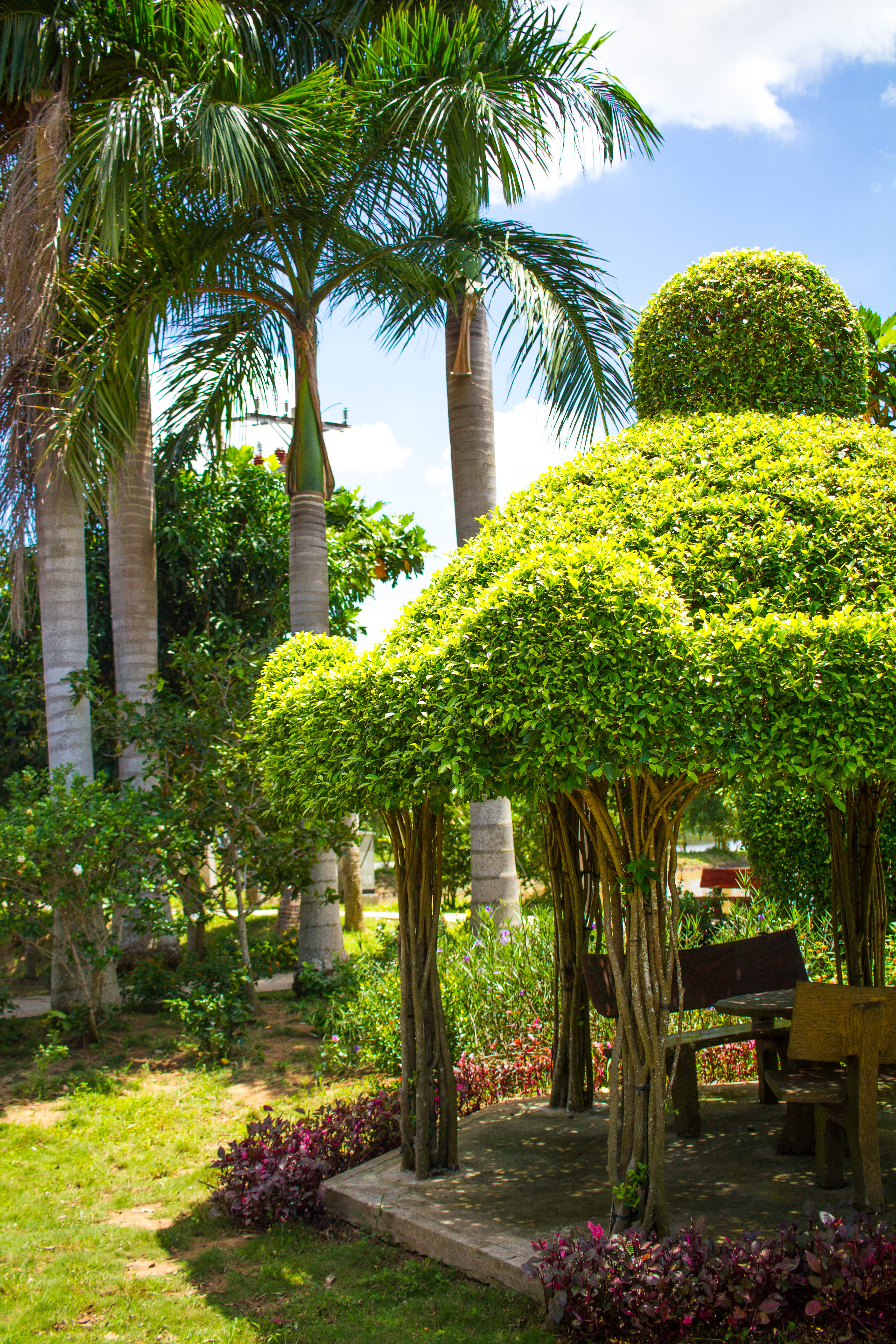 The fish are bred in large, rectangular ponds. By the time they’re 6 months old, they weigh up to 1,2 kilos and are ready for transportation. In the wild, pangasius fish can grow up to 20 years old and weigh between 10 en 18 kilos, but in ponds they can even reach the weight of 25 kilos when they’re about 10 years old! The fish is tastiest after 6 to 8 months, weighing between 800 and 1200 grams. 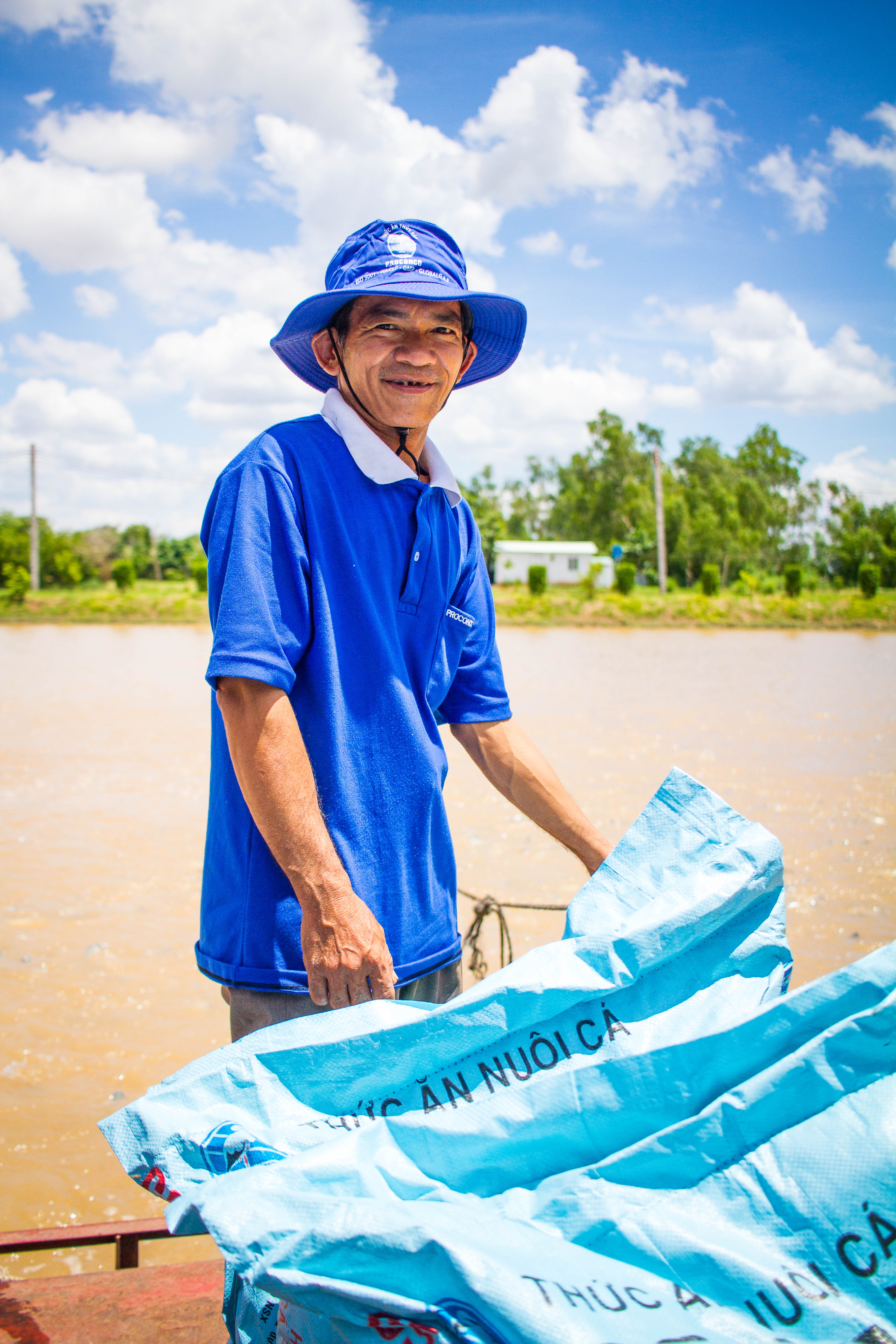 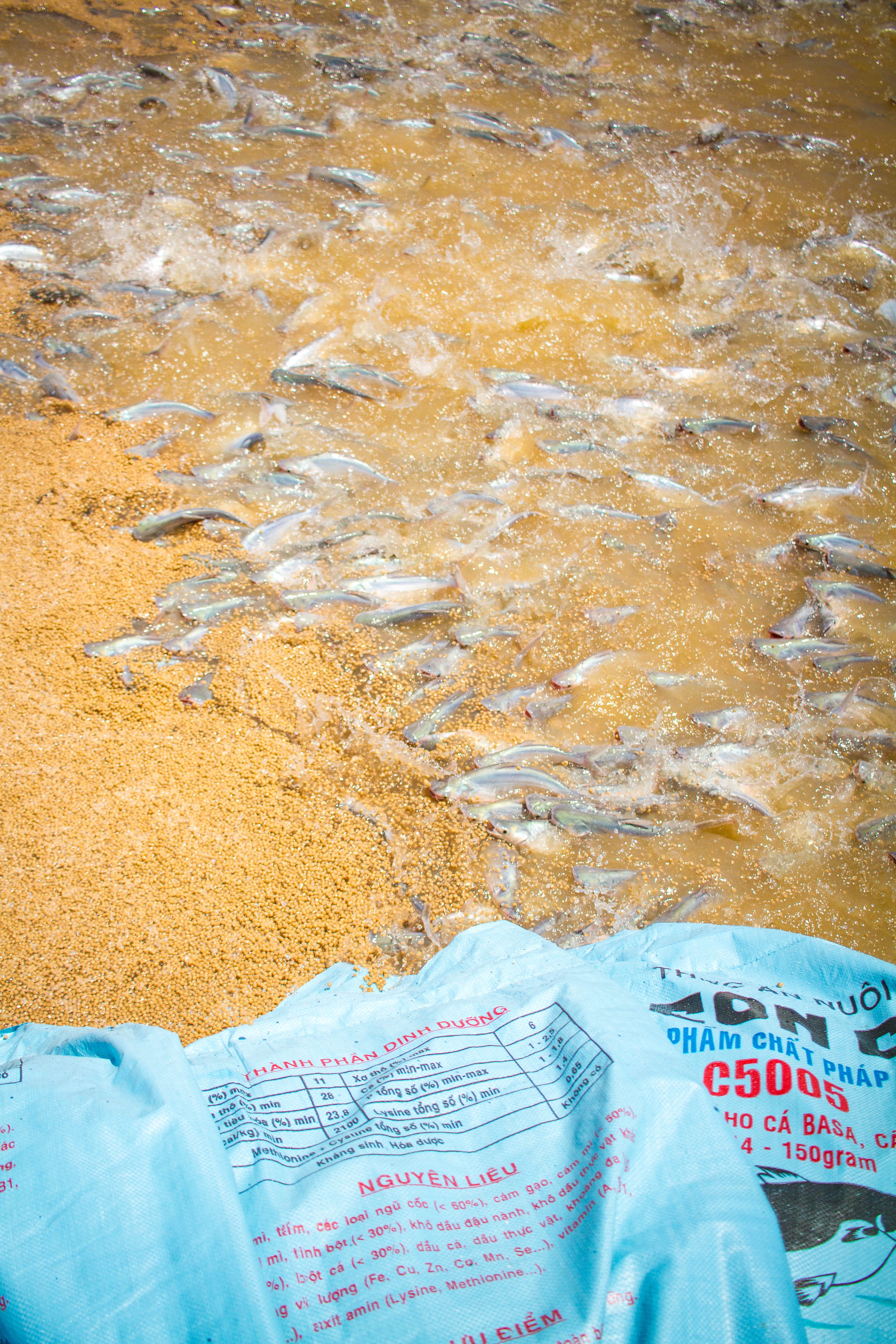 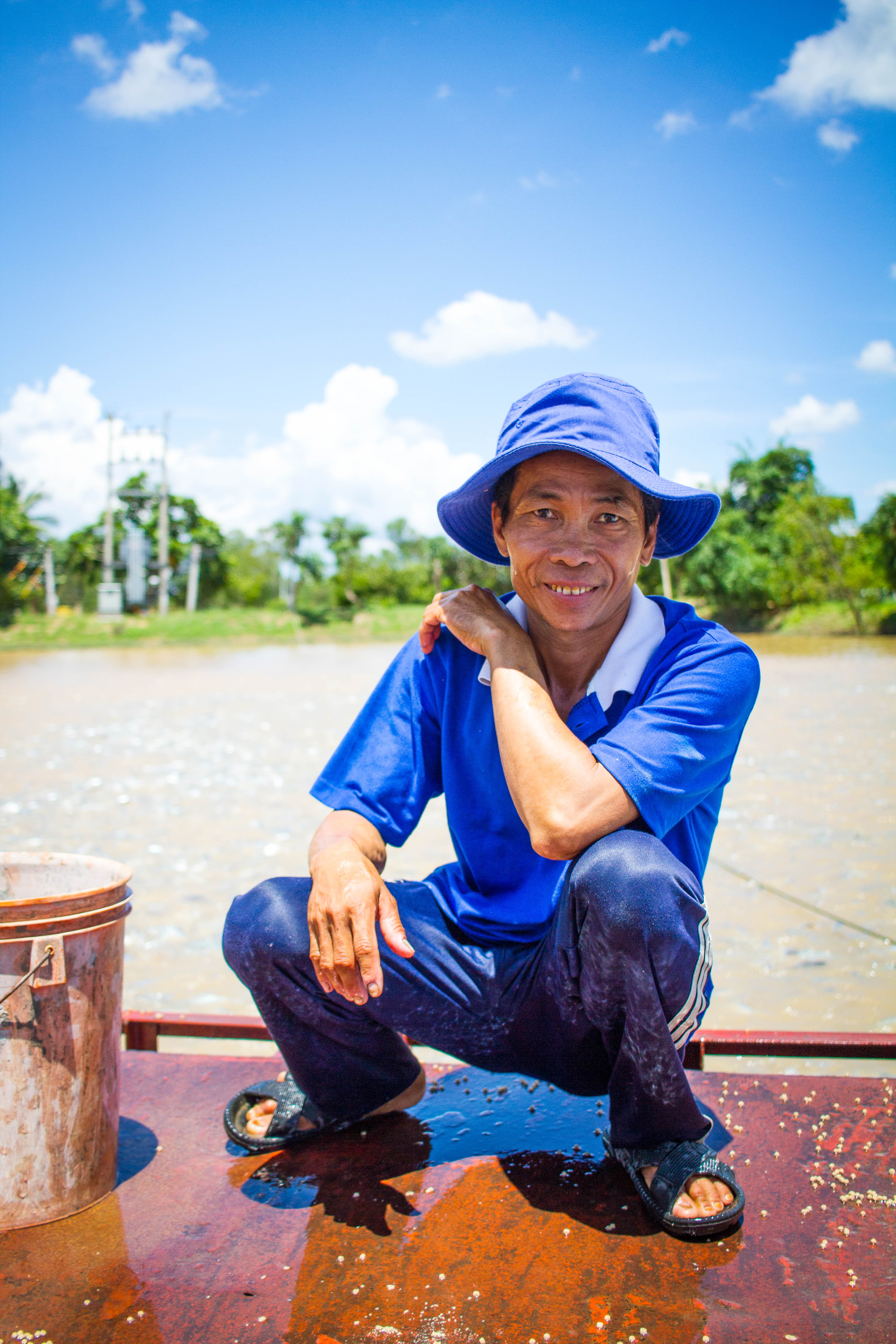 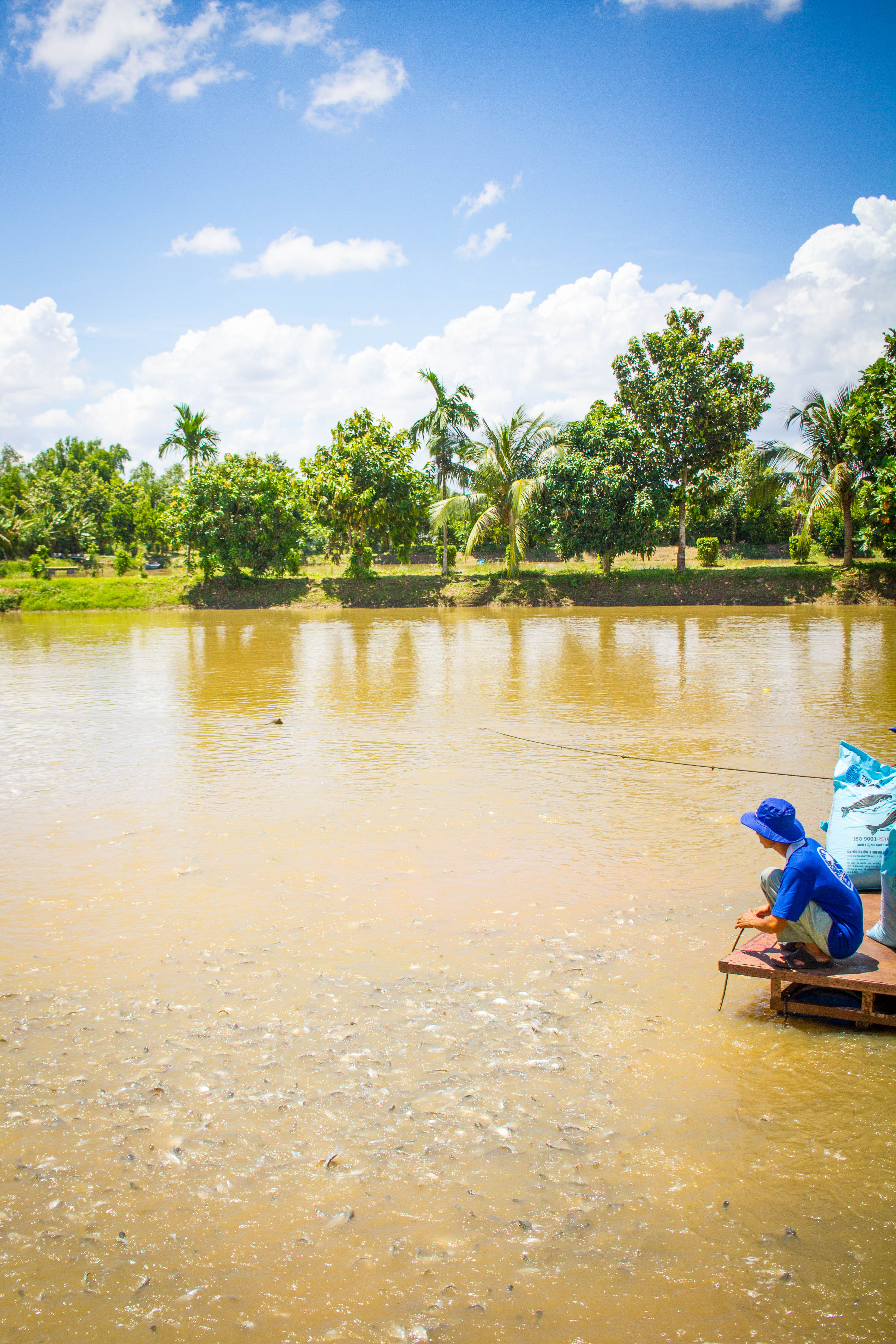 There are about 15 fish per m3 in the ponds: living conditions are better than most articles say. The pangasius fish isn’t a solitary fish, though; they like to stay together, so generally they have more room than they need. The workers who are employed at the farm work 6 days a week, 8 hours a day, from o7.00 until 18.00, with a two-hour break, which they use for eating and recreation. They have an above average salary (in a country where the norm is 300 dollars a month). They also live on the farm grounds. I was struck by how beautiful the terrain was: clean and well-kept, with flowers, butterflies and fruit trees everywhere. This is due to the workers, who maintain the land on their breaks or on their days off (for pleasure and relaxation, they say). 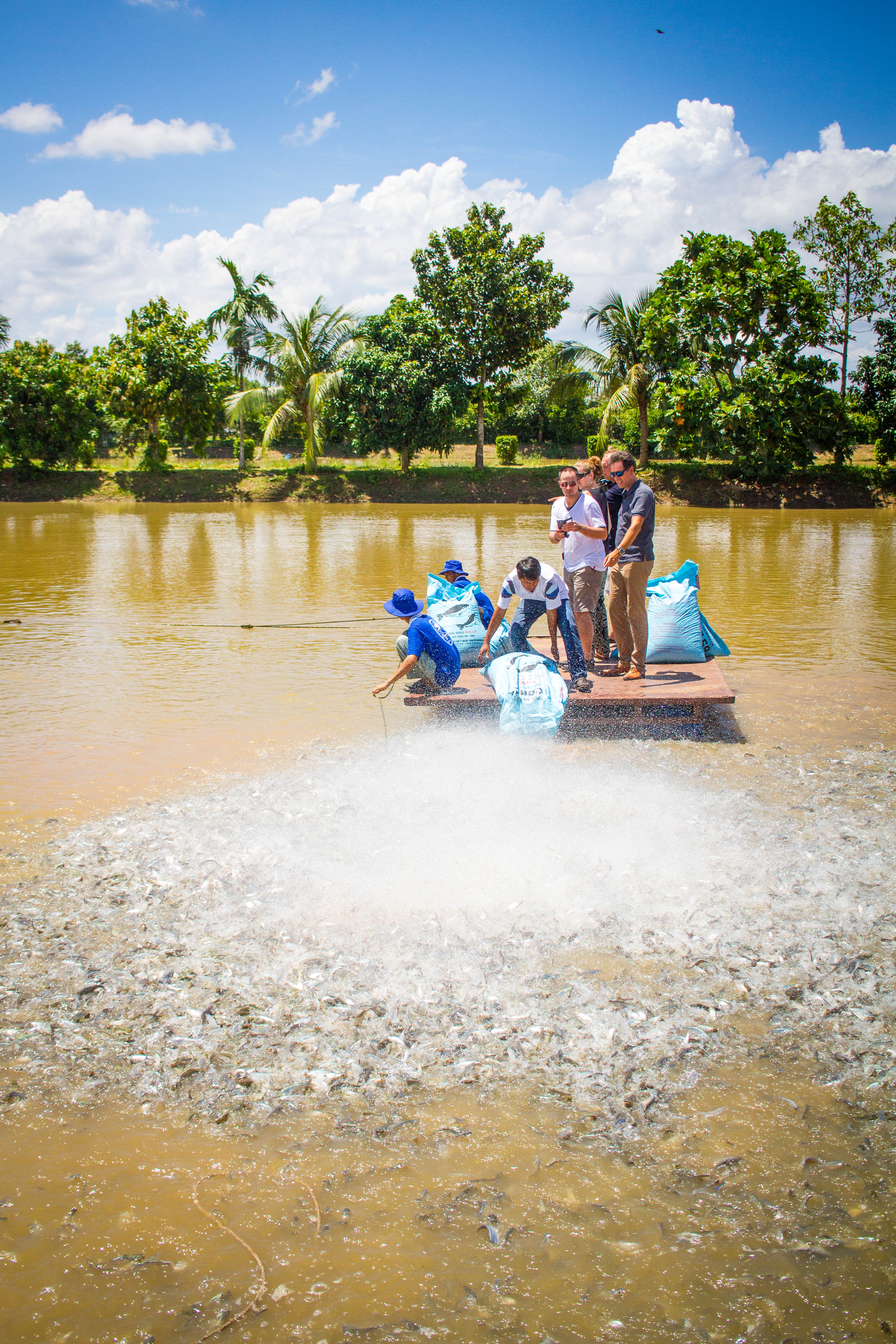 In the gigantic, ASC-certified factory we had to dress up as sterile Martians, to view and photograph the entire production process. We started our tour at the conveyor belt, where the fish were brought in alive, and ended with the deep-frosted pangasius filets. 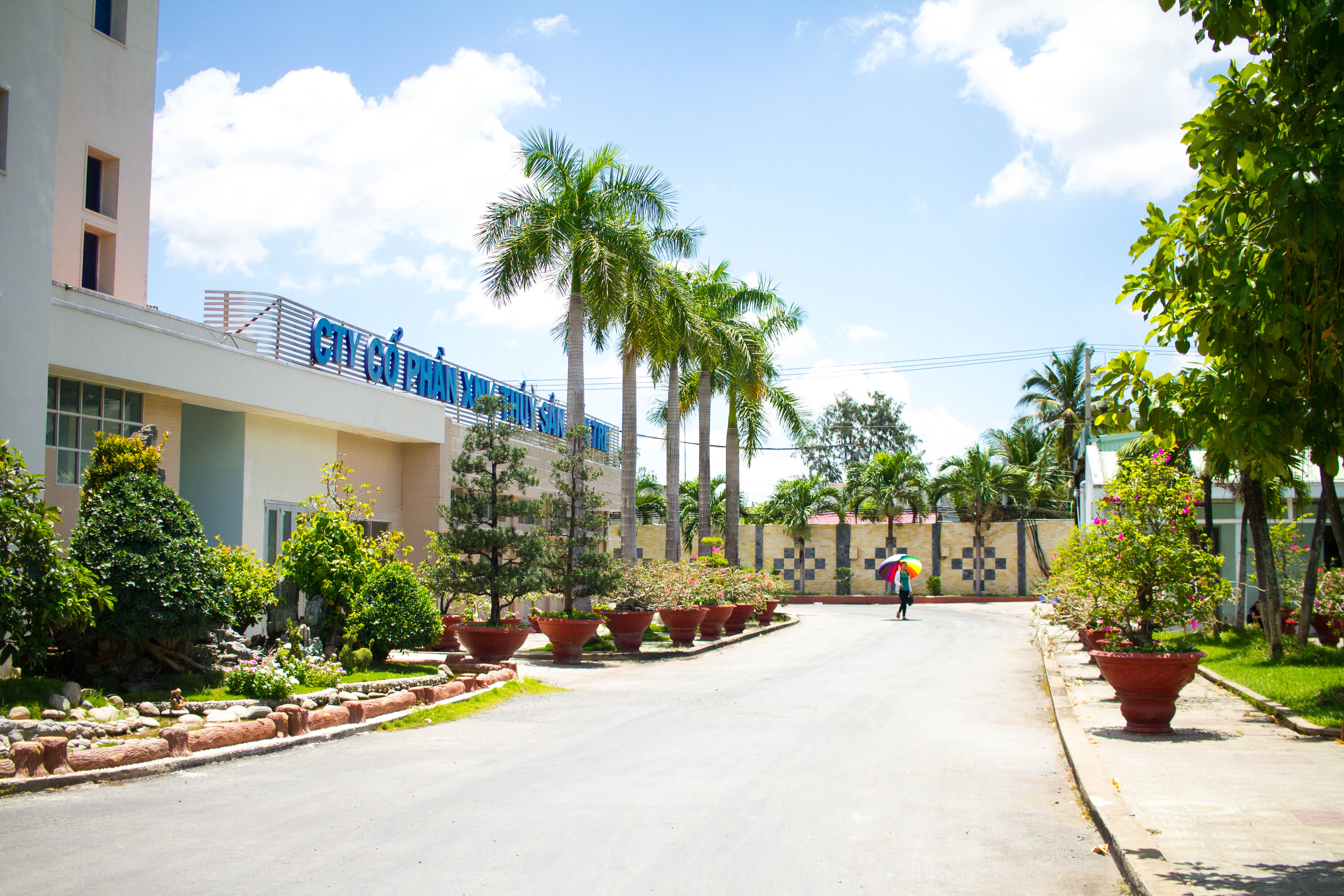 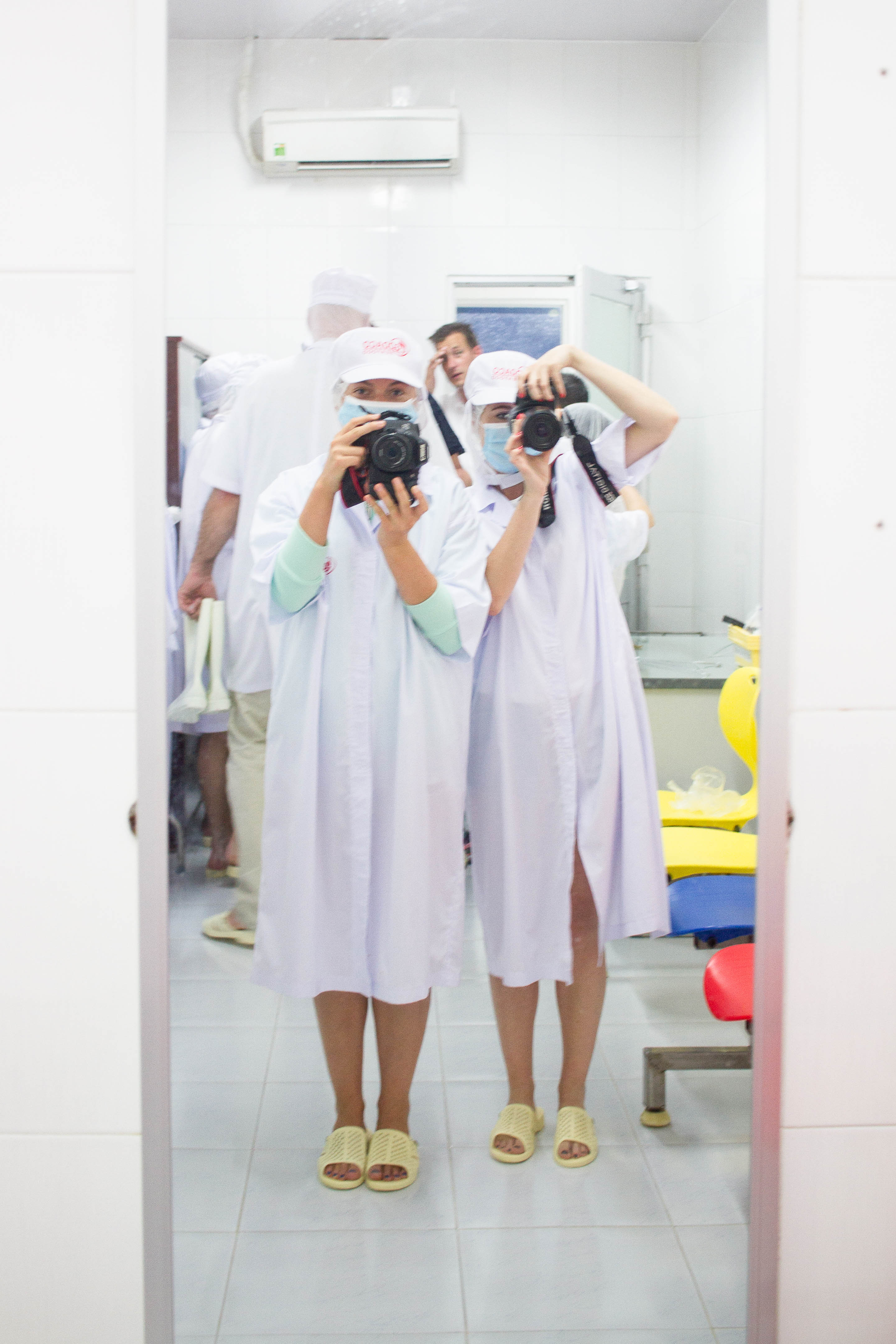 I have to admit: seeing living creatures being thrown on a conveyor belt in a factory, thrashing about, isn’t pleasant. All to be produced into deep-frosted filet for our dining pleasure. But that’s the reality: we buy it, so it gets supplied. And if this has to be this way, I’d rather it happens as humanely and sustainably as possible. I’ve watched closely how the workers kill the fish: jabbing them under their jaw and slicing them open, exsanguinating them as soon as possible in a tank. This seems, to me, more humane than letting the fish die slowly on ice, which is a common practice (although we were told that the ice has a numbing effect). “Animal welfare is a novel concept within the fish farms. New protocols have to be developed, since the ASC doesn’t have a standard for it.” As Esther Luiten from the ASC says.

The factory workers also have two shifts a day, 8 hours in total, 6 days a week. They make 300 dollars a month. 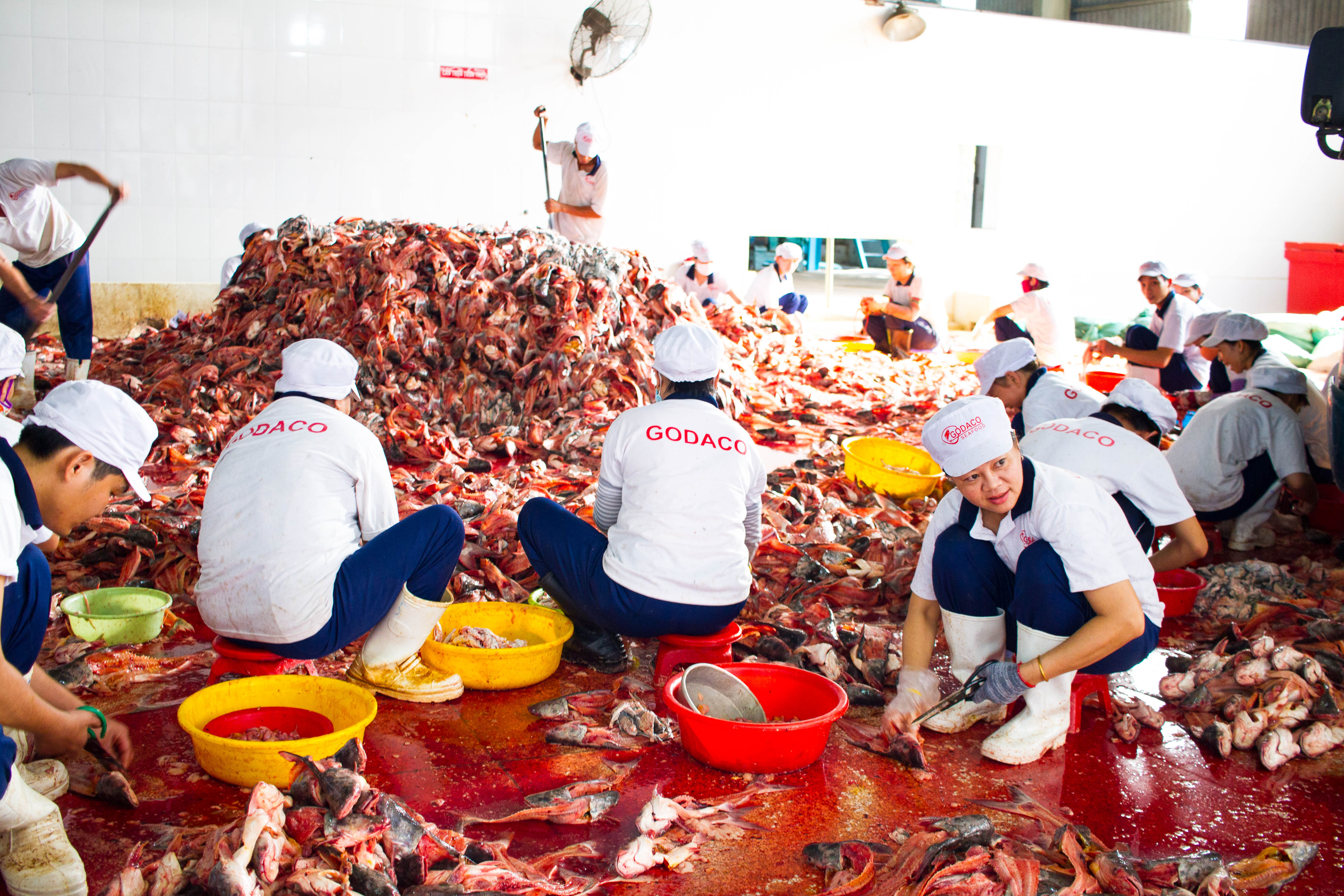 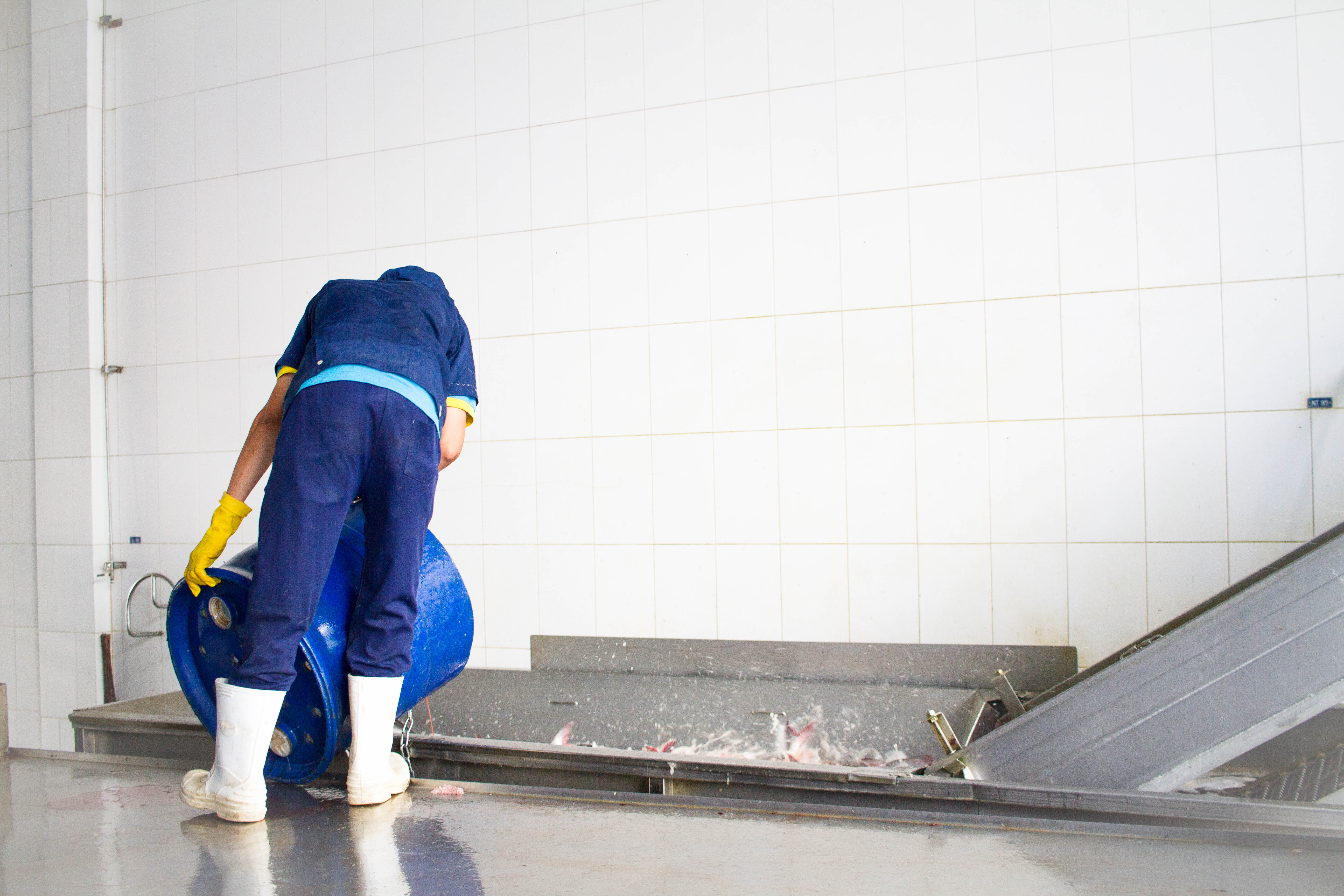 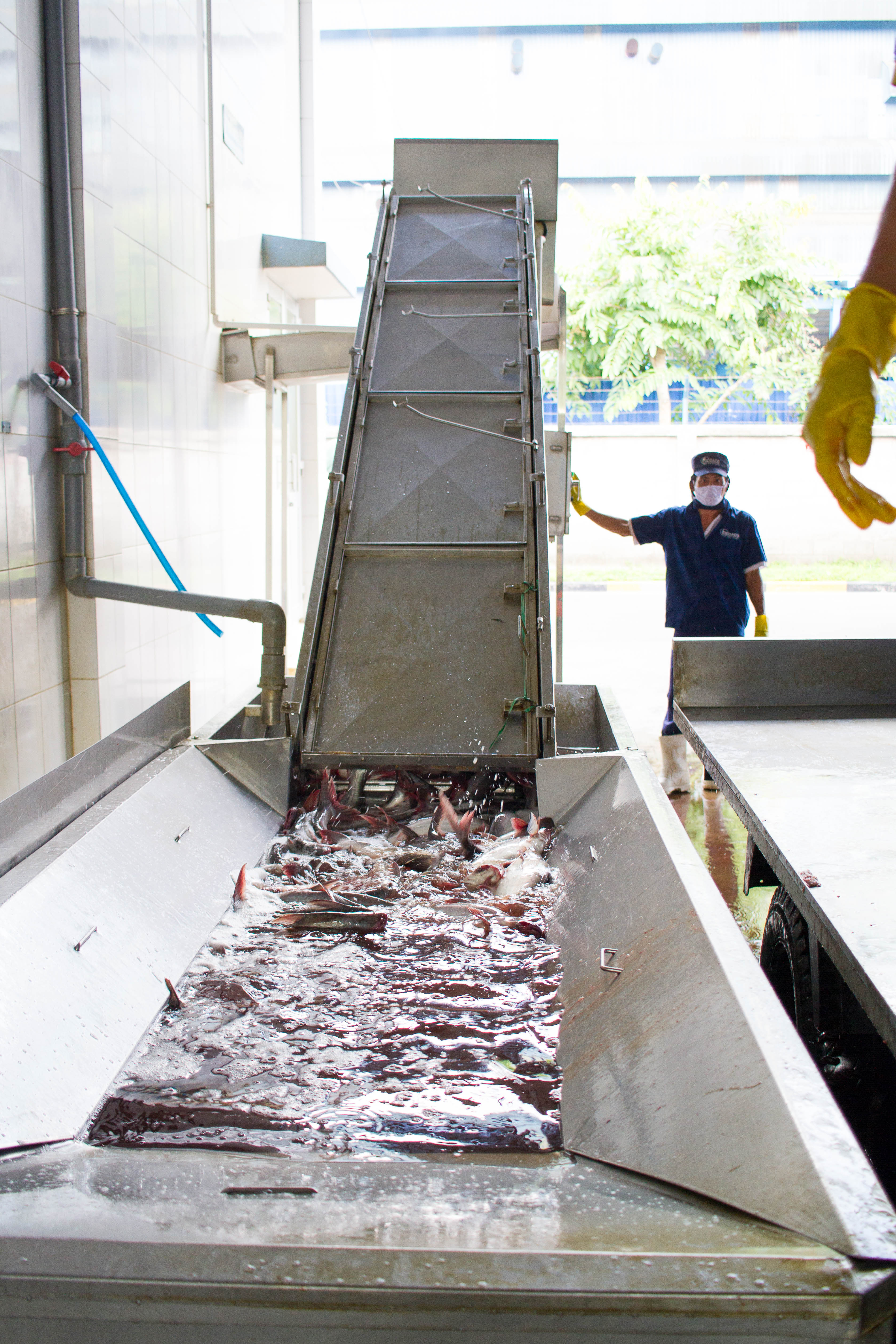 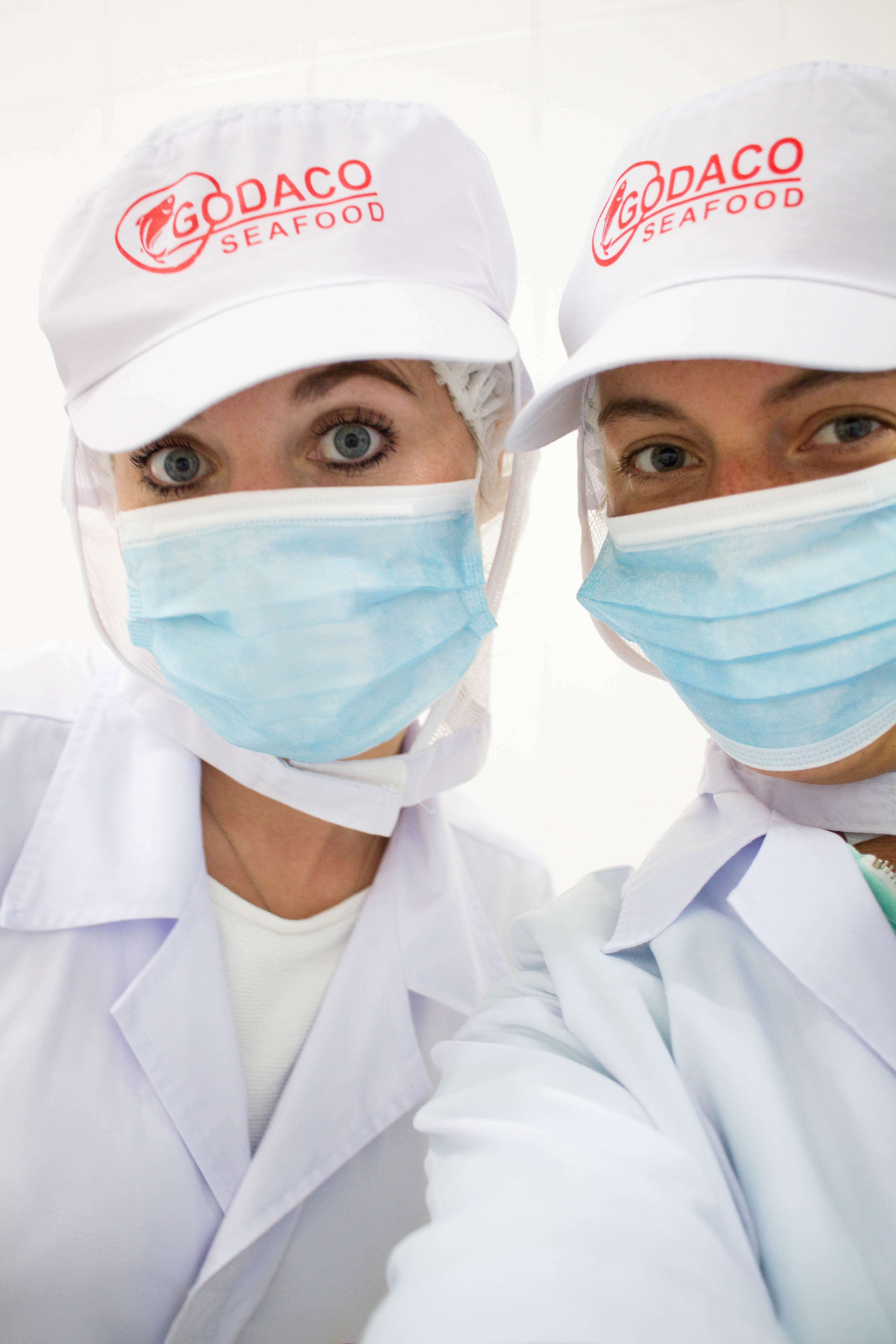 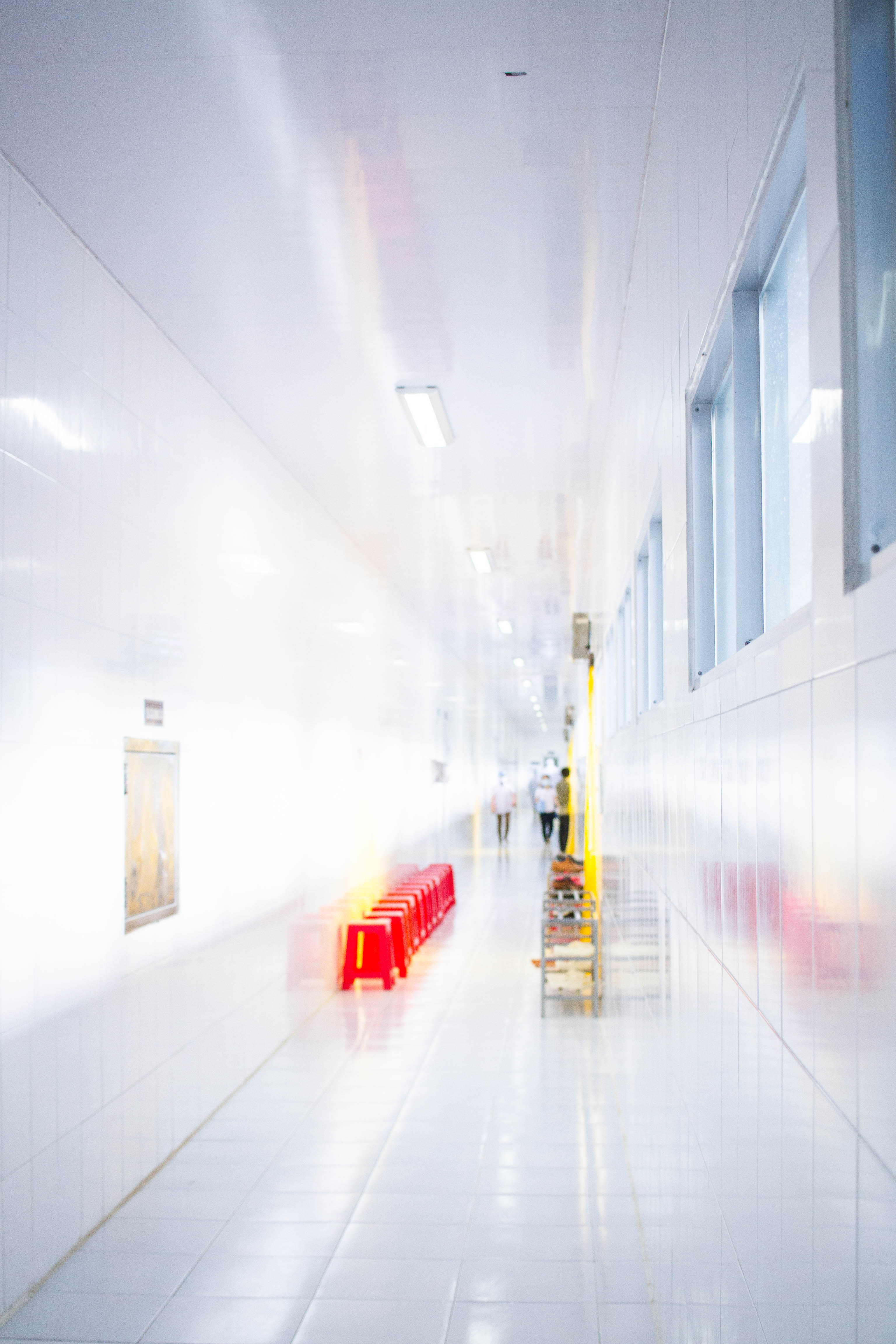 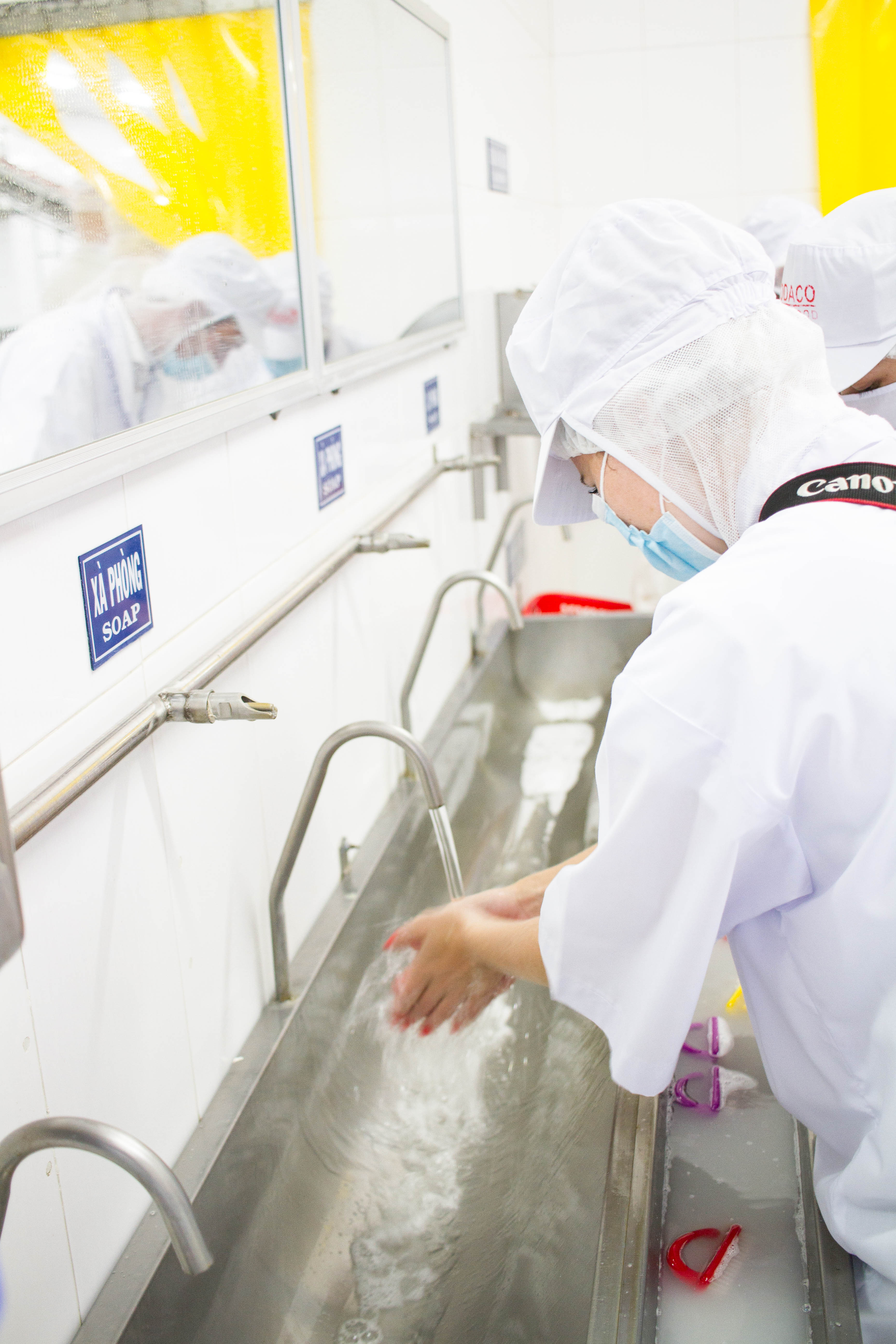 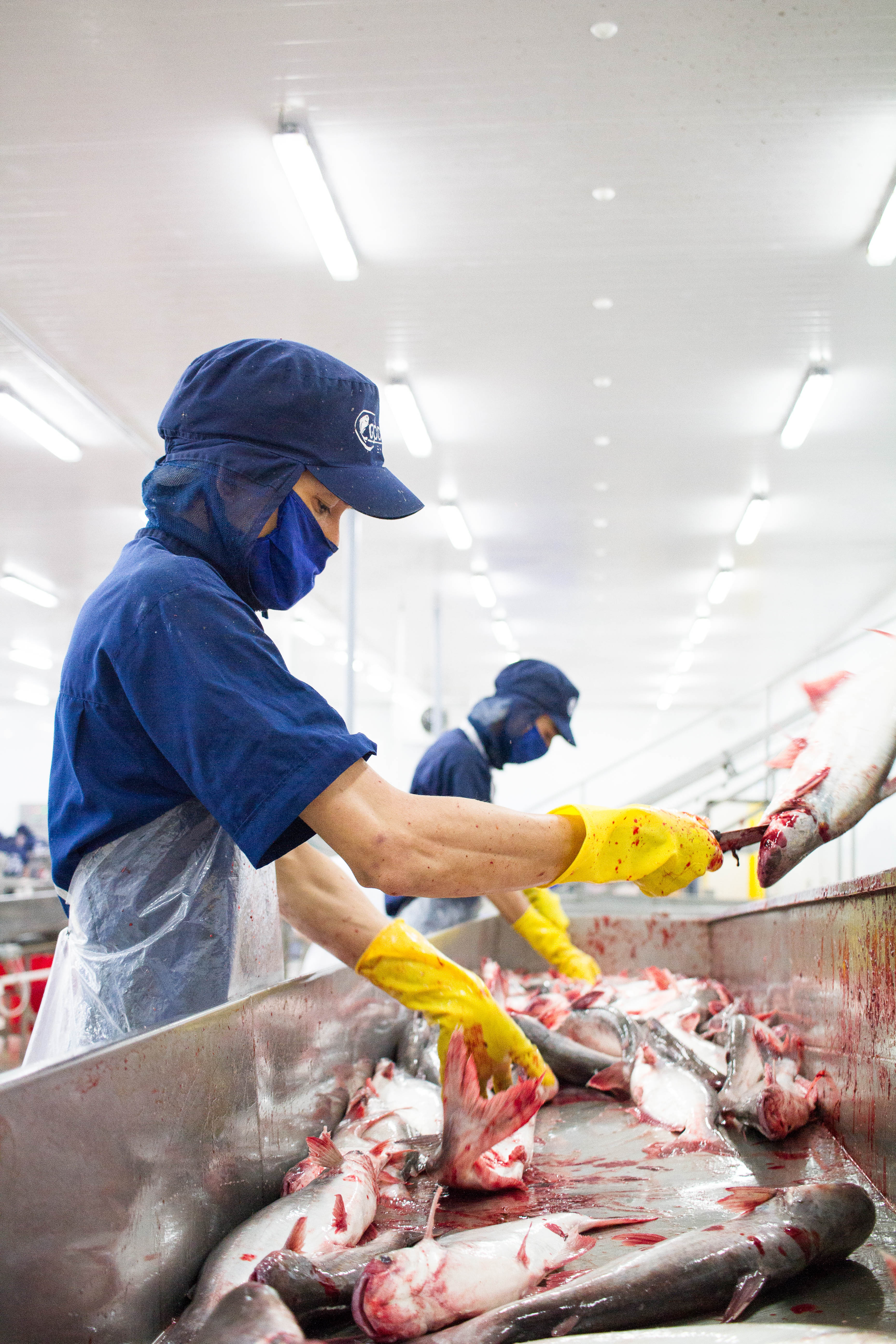 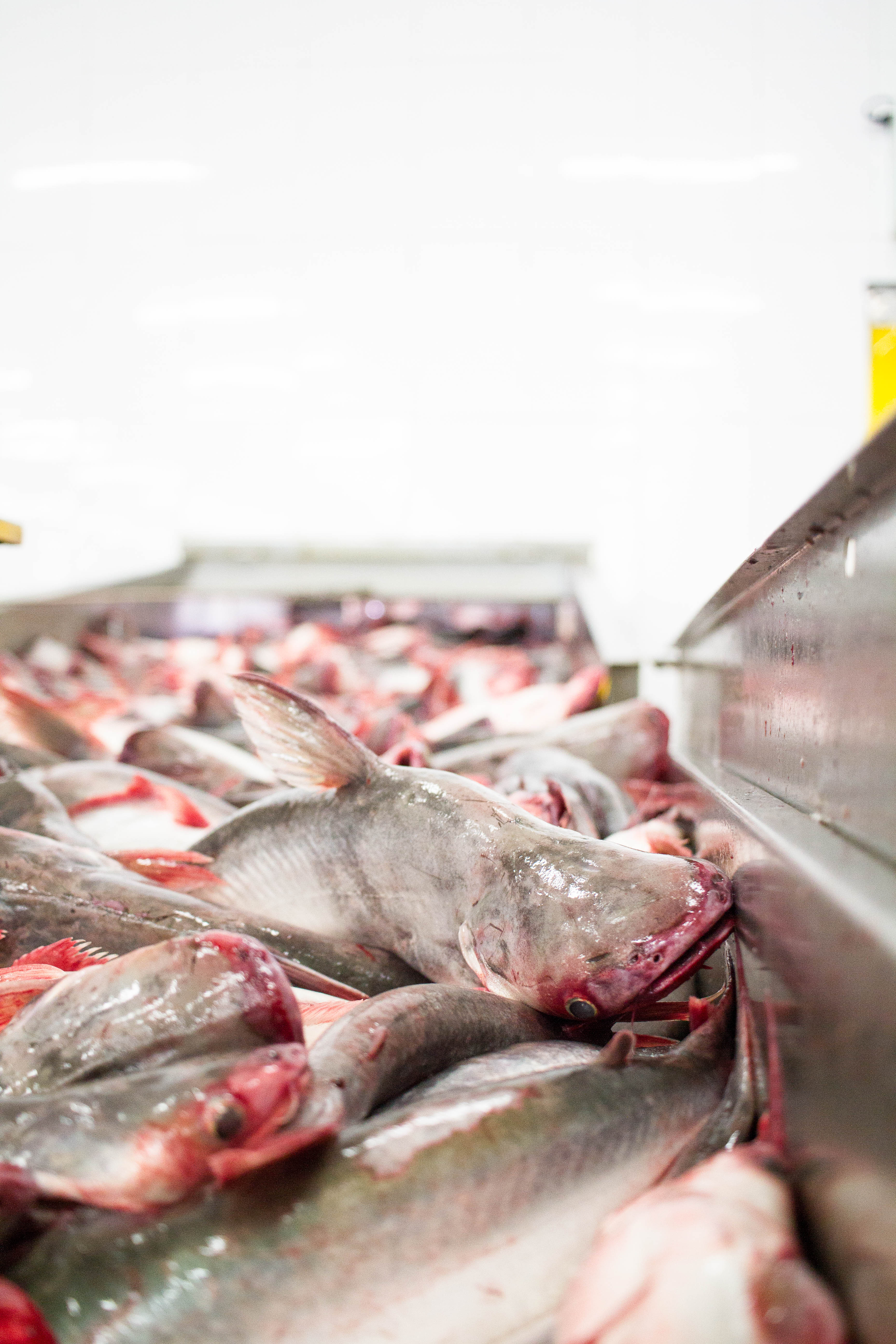 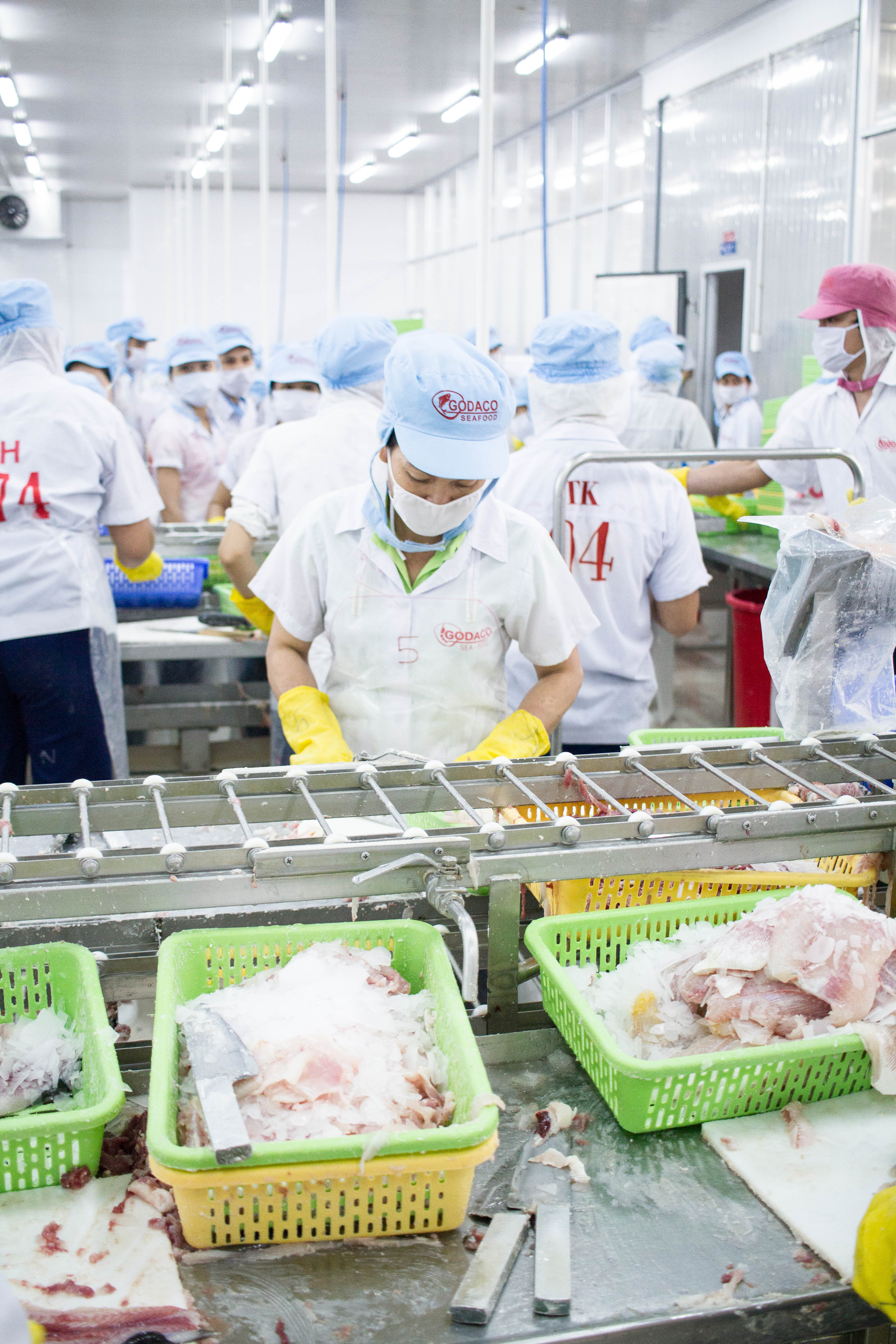 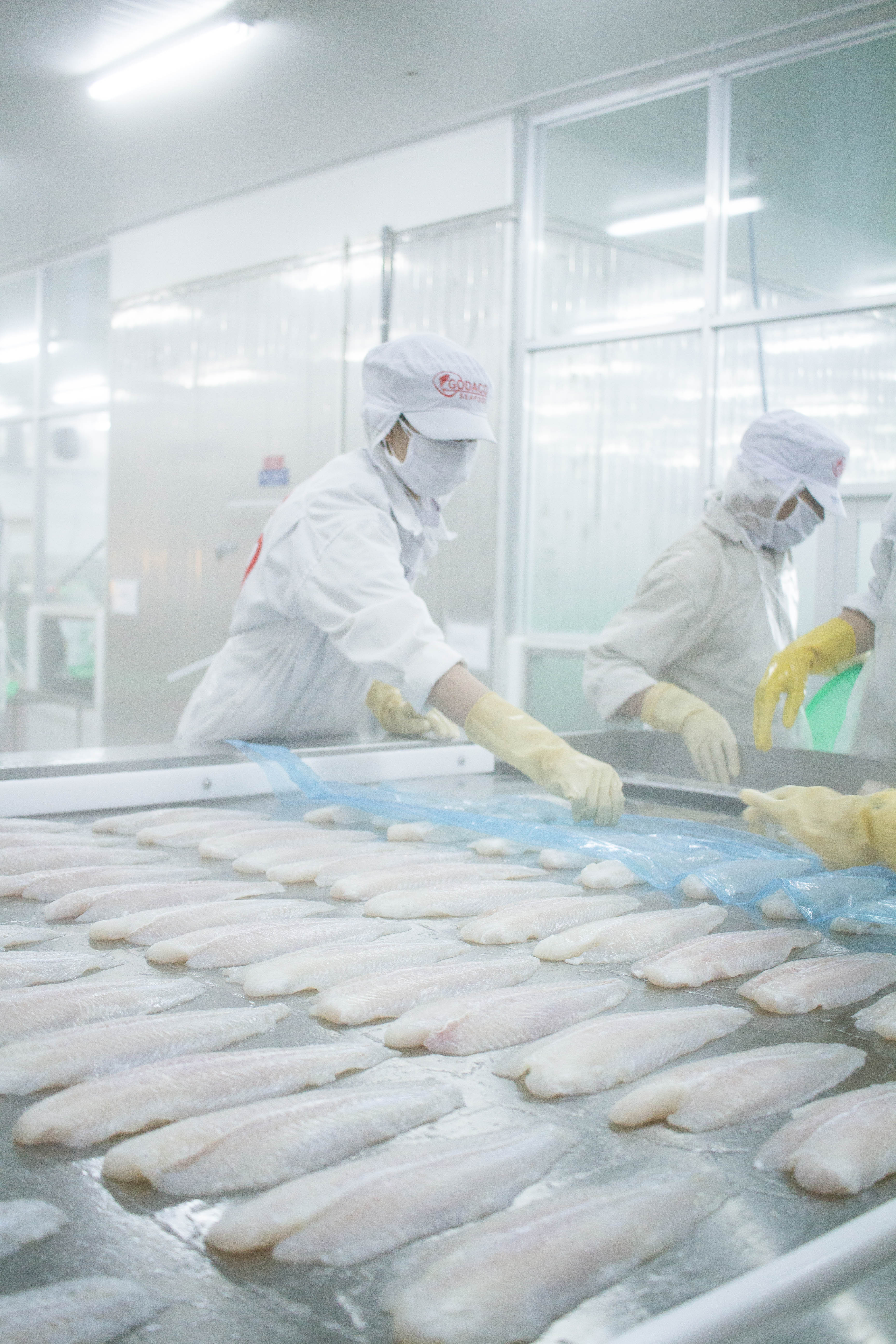 Nothing wrong with pangasius

I can definitely say that there’s nothing wring with the breeding and production process of the pangasius fish. Every panga bought in Holland has the ASC label, which ensures that the fish is sustainably and consciously produced. As for the rumor about toxins: the University of Wageningen has done research and made the following statement in september 2015, indicating that the pangasius is ‘clean':

As for the environment: apparently it’s more sustainable (in terms of CO2) to eat fish that’s bred in farms and imported by boat than to eat fish that’s caught in nets locally and transported in vehicles like trucks. Although we were told several times that there were no exact numbers available. I think it’s, quite logically, better for the aquatic environment to eat fish that bred and not caught.

We come to the last point of contention: the taste of the pangasius fish. Personally, I think that people are influenced by the allegations that I mentioned before: it would be a fish tasting of mud and swimming in its own dirt. I’ve seen first-hand that the water in the nursery ponds is filtered regularly, though; both the farm and the factory have separate filtering facilities and filter ponds with water plants. The whole process is closely and regularly monitored, since it’s a deciding factor with organizations such as ASC and Global Cap.

Of course, there’s no accounting for taste: while one person might like salty sea fish, the other one has a preference for sweet freshwater fish. The pangasius fish has a neutral taste, which makes it easy to prepare in a myriad of dishes. Once at home, I tested the taste: I defrosted one filet and fried it in a bit of olive oil, with salt and pepper. Muddy? Nah. Just neutral.

In Vietnam, we ate the pangasius in a lot of different ways: in spring rolls, steamed with lemongrass, crusted and covered in spring onions, deep-fried, fried in an Asian barbecue marinade and served with a green mango salad, and in casseroles or with fried rice.

My favourite dish was the traditional Vietnamese fish pan with fresh pangasius. Yes, fresh, like you can get it only in Vietnam: directly from the river into the pan, bones, fat and skin and all. The taste of the fish was really remarkable here: sweet and fresh, with a thin layer of fat. It gives it a taste that’s lacking in our Dutch pangasius filet, although that’s easier to prepare. 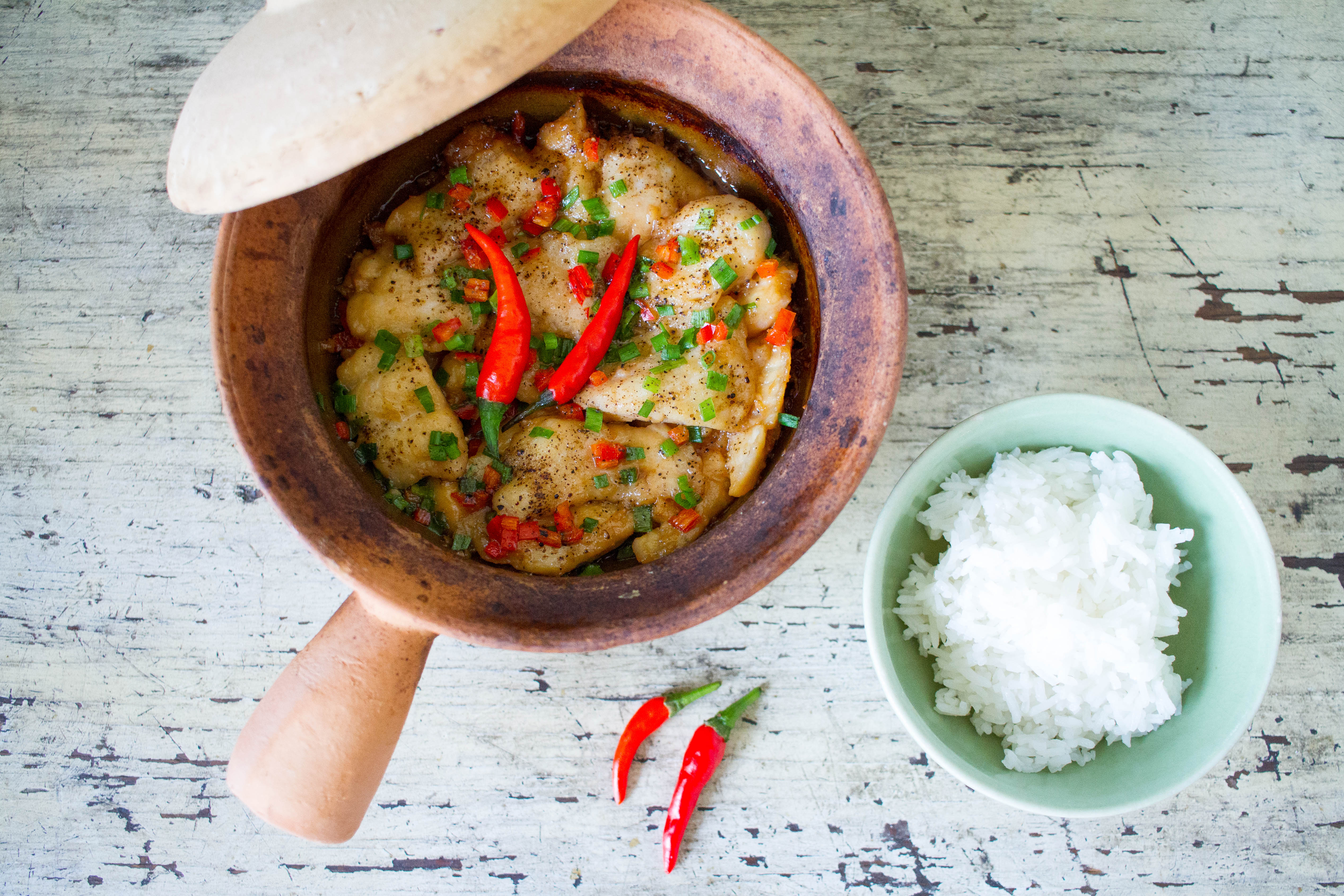 Sustainable from the Far East or caught locally?

My opinion? The pagasius that we buy in Holland is certifiably ‘clean'; the farms in factories in Vietnam have done a really good job in reinstating the fish’s new image. But of course, it’s up to you whether you want to consume a locally caught sea fish (at the risk of overfishing) or a cheaper, imported, but sustainably produced fish like the pangasius.

What’s your opinion on the matter? 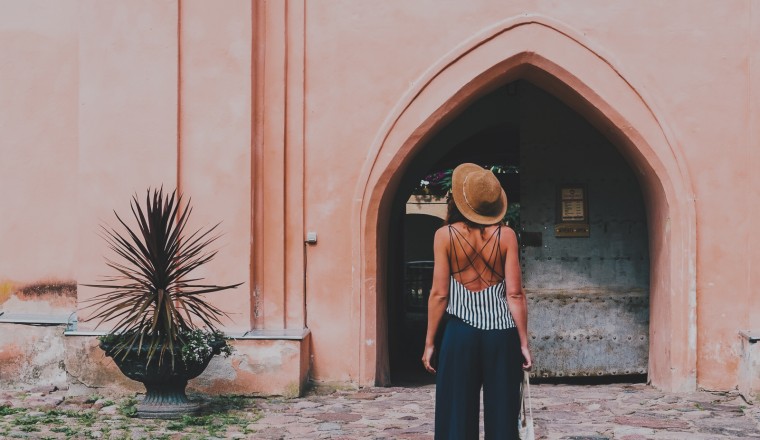